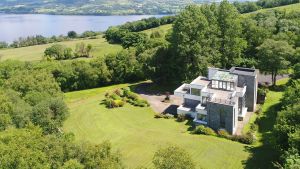 A thousand years ago the village of Killaloe in Co Clare was considered the capital of Ireland.

It is the birthplace of the Munster warlord Brian Boru, who ruled Ireland as high king from his home in the village during the early 11th century.

Today Killaloe is considered the Kinsale of the mid-west, with its easy water access, good restaurants and picturesque setting on the banks of the River Shannon, as well as being a satellite town to the nearby city of Limerick.

The Downs, a striking contemporary residence in the village, was originally constructed as the president’s home for the University of Limerick (UL). The building stretches to four storeys, taking in fine views of Lough Derg from its interior and five generous balconies. The design is said to be influenced by one of the founding fathers of contemporary American architecture, Frank Lloyd Wright.

After the retirement of Prof Roger Downer from UL in 2007, the house stood idle for almost a decade, prompting criticism of UL when it set about building a second president’s residence closer to the campus, while this one, bought by the college in 1998, had been mostly vacant. It was placed on the market seeking €850,000 in 2018 and sold last year for €790,000 to its current owners.

“When we came to see it after looking at the pictures we really thought ‘wow’,” says the owner. “ The views of the lake, the uniqueness of the design – which you would never get planning for now – and the gardens. We saw the potential immediately, though it was quite dated and needed work.”

They have since made some changes including “moving some walls, changing the space around at garden level to add a further bedroom”, in addition to rewiring the house, replacing the existing heating system to a more eco-friendly geothermal one and installing new flooring.

They also installed a new kitchen and began to bring the gardens back to their former glory.

The couple and their young family moved in just before lockdown and were in the process of decorating the interiors further – which goes to explain why it is sparsely furnished. But life has taken them on a different track with a new career opportunity in the UK.

They considered renting the property, but have decided to sell and have placed it on the market through Sherry FitzGerald seeking €925,000.

The house has an abundance of space with 464sq m (5,000sq ft) and five balconies. When it was home to Prof Downer, it was the venue for receptions for UL, and it is not hard to see why, as it is a perfect space for entertaining.

In its current layout, there are reception rooms on the top two levels – to take best advantage of the views – with bedrooms at garden level and a vast basement originally intended for leisure facilities. This has now been divided to give a cinema room and a “rumpus room” for children, along with an additional bedroom, bathroom, plant room and utility.

Frank Lloyd Wright once said: “Study nature, love nature, stay close to nature, it will never fail you”. This seems most apt in this setting on almost three acres of mature trees overlooking Lough Derg.