Eyrefield Lodge has bred many champions, including Pretty Polly, one of the all-time greats 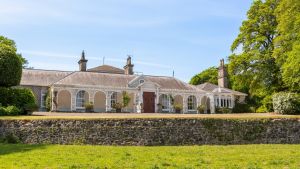 Turn off the busy M7 for the Curragh, cross a cattle grid in the direction of Athgarvan and it’s like entering another world. On a summer’s day the rolling plains are dotted everywhere with walkers, cyclists, joggers, picnickers and, of course, horses on the gallops.

Newly shorn sheep pick their way across the road, as occasional traffic cuts its way through this rural idyll. A couple of kilometres later another cattle grid marks the far boundary of the Curragh, and within moments Eyrefield Lodge Stud presents itself.

From 1760, when it operated as a hunting lodge, it was amended and improved over the years to become one of the most famous lodges on the Curragh. In 1879 it was inherited by Henry Eyre Linde, and it was then that its reputation as a breeding ground for champion racehorses was forged.

Since the turn of the 20th century, when Maj Eustace Loder was assigned to the Curragh and bought the property sight unseen, its sporting success has continued through three generations of the Loder family. Known as “Lucky” Loder, he won the Irish Derby and the Oaks in 1900 and the following year bred Pretty Polly, one of the most successful fillies of all time, and whose descendants still live at Eyrefield. A winner of the 1,000 Guineas, the Oaks and the St Leger, she retired to stud as winner of 22 of her 24 starts.

Eustace Loder never married, and the property passed to a nephew who in turn passed it to his godson, Sir Edmund Loder. Now Edmund and his wife, Sue, have decided to retire from a long and rewarding bloodstock-breeding career at Eyrefield Lodge and are placing the stud on 160 acres on the market through Jordan Auctioneers, seeking €4 million.

Edmund inherited the property almost 50 years ago, when he was 30, and admits it was quite an undertaking and a big change from his Grade I listed Leonardslee home, in Sussex. “I had no experience of training apart from loving horse racing. But the property came with very good advisers,” says Edmund, who soon got stuck in to continue Eyrefield’s breeding success, with many highlights, including the mother-and-daughter European flat-champion duo Marling and Marwell.

“We have had some wonderful race days here. It’s incredibly exciting to win. And then it’s beautiful here in the spring as the foals are born. Athgarvan, nearby, is a lovely proper village where everybody knows everybody and they are all so welcoming.”

The setting is wonderful too, fringed by mature trees, and with striking gardens and grounds. The Loder’s easy contract with nature is evident everywhere, from the swarming bees around a hive high in the eaves to the family of red squirrels who appear at the kitchen window daily to take hazelnuts from Sue’s hand.

The lodge itself is a cosy size, with some grander embellishments added during the major’s tenure, including the pretty carved-wood veranda to the front, an entrance hall and decorative cornicing, architraves and panelling on the original receptions.

These rooms to the front of the house comprise the sitting room, drawing room and then a dining room and bedroom suite, which were added in the first extension of the lodge. The reception rooms are well proportioned, with vaulted ceilings, fine antique fireplaces at their hearts and tall sash windows overlooking the surrounding gardens.

Sue, who counts interior decor, professional gardening and art restoration among her many talents from a life lived on several continents, has applied her skills to every part of the house, painting every room, acquiring the furniture from various auctions down the years and painstakingly restoring artwork along the way. All of Eyrefield’s greatest champions are commemorated in canvas, including in works by the acclaimed equestrian artist Emil Adam.

There have been further additions to the property over the years, bringing it all to a 5,048sq ft warren of rooms, including seven bedrooms, five bathrooms, an office, a library and a kitchen-breakfast room and sunroom. One of the smaller bedrooms bears the sign “Mark Prescott’s Room”, for their lifelong friend and celebrated Newmarket trainer, who visits annually for the horse sales.

The grounds include an abundance of ancillary staff accommodation – all currently let – including a four-bed Stud Grooms House, the Gate Lodge opposite the entrance (on 22 acres), an Oat Loft flat and Eyre Cottage located on the Curragh.

Positioned on prime limestone breeding land with every facility for a stud operation, Eyrefield is described by estate agent Paddy Jordan as “one of the most important stud farms to come on the market in Kildare. Among the last owner-breeder operations, it’s a trophy property”. Its location beside the Curragh and Goffs, and just 50km from Dublin and its airport, will no doubt catch the eye of international and local stud operators who have been on the acquisition trail in recent times.

Apart from the valuable stud, Eyrefield’s crowning glory has to be its vast, rambling gardens, where the labour has been neatly divided between “roses, lawns and hedges for Edmund and the rest for me”, says Sue. Both have their work cut out. A line of rose bushes fringe the lawn, but round a corner and hundreds of roses of every size, breed and hue abound. The air is thick with their wonderful scent.

Sue has created a series of gardens off a wisteria-strewn archway replete with hundreds of flowers and plants of every conceivable variety. There’s a pond garden with lily pads and water violets, a butterfly garden has verbena, daisies and buddleia, a fern walk includes varieties from Australia and Nepal. Two towering beeches guard an enclosed space created for the graves of the greats Pretty Polly, Spearmint, Spion Kop, Marwell and Marling. A fresh grave has just been covered for the last departed family dog. Added to all this are further fruit gardens, a greenhouse and an outdoor pool.

It would be a shame if a new buyer hell bent on a perfectly preened stud farm were to overlook these magnificent gardens, which are a huge part of Eyrefield’s old-world charm. As Sue puts it: “The Loders do two things, horses and gardens. That’s it.” At Eyrefield Lodge they have managed to do the very best of both.

Conor Pope’s staycation diary: ‘It’s like I’m staring at a Polaroid of my childhood holidays’
10