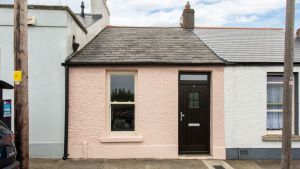 How Magenta Place got its evocative name would be an interesting one for local Glasthule historians to ferret out.

The short terrace of single storey cottages off Eden Road faces on to The Metals, the popular walk/cycle path that runs beside the Dart line from Dún Laoghaire to Dalkey and, with the exception of the couple of larger houses at one end of the terrace, must have been built as workman’s cottages.

Most are double-fronted but number 4 – now for sale – presents, like its neighbour, with just one window and front door out directly on to the street.

It last changed hands in 2014 and by then all the work had been done – the cottage had been extended to the rear and modernised throughout. Some clever decisions were made by whoever designed the new layout, making the original part of the house the sleeping quarters.

A long hallway now leads through to the extension at the rear passing three internal doors on the way. The first opens into a large double bedroom to the front; the second, into a full-size bathroom; and the third into a small single to the rear. This room is laid out as a home office with a Murphy bed ready to be sprung from the wall for guests.

The single storey extension on the back made space for a decent sized eat-in kitchen opening into a living room. The architect found a way – by installing a glazed bay window in the kitchen – to throw light back into that small second bedroom without compromising the size of the new extension.

The living room opens via double-glazed doors out to the patio, which is beautifully planted with plenty of space for a table and chairs.

The current, country-based owners bought in 2014 using the house intermittently as their Dublin base. The price – the Property Price Register shows it sold for €445,000 – was considered strong at the time, not least because the cottage is just 60sq m/646sq ft.

The main attraction, then as now, was the location and the fact that it had been renovated, and many buyers will always prefer a house to an apartment. Parking is on street and there appears to be plenty of space.

It’s now probably time for a redecoration – the cottage is much as it was in 2014 – and perhaps the energy efficiency could do with an overhaul given its E2 energy rating.