The property features a lake, a Georgian house built in 1820 and a five-bed family home 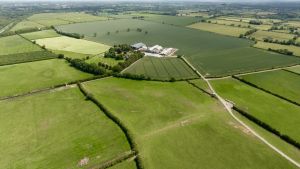 While it isn’t that unusual for an estate agent or auctioneer to talk up a property in advance of its sale, there are always cases where that praise could be said to be entirely justified.

One such case is Ballinla Farm in Edenderry, Co Offaly. The property, which Stephen Barry of Raymond Potterton auctioneers describes as “amazing”, comes to the market for the first time in more than 100 years following careful management over three generations by the Tong family.

The farm, which goes under the hammer on Tuesday, August 11th, at the Johnstown Estate Hotel in Enfield, Co Meath comprises 1,090 acres (441 hectares), “one of the largest and most productive farms ever offered for sale on the open market” according to the auctioneer.

The property, which is being sold in one or more lots at a guide price of between €9 million and €10 million, comprises 720 acres (291 hectares) of high-yielding tillage lands, 190 acres (77 hectares) of highly-productive grassland, and 180 acres (73 hectares )of professionally managed forestry predominantly of Sitka and Norway Spruce.

It also features a 3 acre (1.2 hectare) lake, which was excavated and stocked with coarse fish, and which supports a large population of swans, wild duck and migratory birds.

Uniquely, the farm is laid out in a single block with more than 5km of public road frontage and serviced by 8km of internal roadways. The land is zoned for agricultural use but the road frontage and easy access to the motorway network may offer potential for rezoning to residential or commercial use. However the property is not situated close to other residential developments that might provide precedent.

But while the farm’s ongoing commercial success will be its main selling point, its residential buildings also offer the purchaser the opportunity to create a substantial family home, or indeed to branch out into the agri-tourism business.

Ballinla House would be ideal for either use. Built originally in 1820, this is a fine non-basement Georgian house. Situated within a parkland setting of mature hardwood trees and approached by a short avenue, the property, while unoccupied, has been well maintained by the owners. And though the interior is in need of refurbishment, its four bedrooms, three reception rooms, kitchen and spacious entrance hall could be upgraded for residential or commercial purposes.

Ballinla Farm is well located just 5km from Edenderry and 60km from Dublin city centre via the M4 motorway.

Seat’s new Leon: It’s now better than the VW Golf it’s based on
6