After Emma and ‘the Beast’, a bumper week for antiques sales as 8,000 lots go for sale

Art, jewellery, furniture and vintage items on the block in Dublin, Waterford and Laois 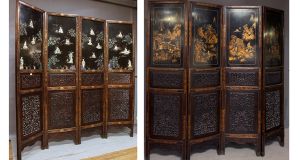 A carved blackwood and lacquered screen applied with ivory figures (€6,000-€10,000) which will be auctioned at Mullen’s Auctioneers

The week ahead will be exceptionally busy for Irish auctioneers as sales postponed due to the poor weather vie for attention with those already scheduled. Between now and Wednesday evening, at locations from Cavan to Cork, a blizzard of some 8,000 lots ranging from Chinese ceramics to crystal chandeliers will go under the hammer at various locations. Here’s what’s happening where and when.

Auctioneer Damien Matthews will hold an on-the-premises house clearance auction in Ashbrook, Ballyjamesduff, Co. Cavan, on Saturday, March 10th, and Sunday (March 11th) at 1.30pm each day. Some items have also been brought in from other properties including ‘The Old Rectory, Broadford, Co Kildare, and in all there are over 1,700 lots including antique furniture, rugs, Irish paintings, silver, china, crystal, jewellery, garden statuary and various collectibles. See matthewsauctionrooms.com

Separately, at 7pm there is an Irish and British art and literature sale with affordable art by painters including Graham Knuttel, Harry Kernoff, Maurice Canning Wilks, William Conor, Tony O’Malley and Cecil Maguire, whose Trevi Fountain is estimated at €3,000-€5,000.

Elsewhere, on Monday evening, March 12th,Morgan O Driscoll Auctioneers in Skibbereen, Co Cork, is offering an alternative to the saleroom – an Irish art action with 247 lots and ongoing online-only bidding which ends on Monday evening between 6.30pm and 11pm. For catalogue and bidding details see morganodriscoll.com

On Monday and Tuesday, March 12th and 13th, the much publicised Interiors Sale, assembled by Niall Mullen and hosted by Victor Mee, with 3,200 lots from various venues and clubs, will take place at the golf club of the Heritage Hotel, Killenard, Portarlington, Co Laois, at 10am daily.

Described as a sort of “Celtic Tiger” clearance sale, it includes fixtures, fittings and memorabilia from Dublin venues Residence, Howl at the Moon, the Shelbourne Hotel and Clerys .

Most lots will be sold without reserve, and while absentee and online bidding is available buyers who turn up and purchase in person are promised a 3 per cent discount on the normal 19 per cent auction buyer’s fee.

Among the highlights is a suite of portrait paintings of all 13 former taoisigh by “Johnny Wilson” (a pseudonym for Chinese artist, Zhang Yi) to be sold as a single lot with an estimate of €30,000-€40,000. Viewing on Saturday, March 10th, and Sunday, March 11th, from 11am-6pm. For catalogue see victormeeauctions.ie

Finally, another bumper two-day sale will be held at on Tuesday and Wednesday, March 13th and 14th, at Sheppards in Durrow, Co Laois, with 1,245 lots including furniture, art, china, crystal, jewellery, silver and collectibles.

Among the highlights are two very different paintings of women: one a romantic image of a 19th century Irish peasant girl, the other a portrait of Jane Seymour, the third wife of Henry VIII. Lot 4, The Colleen Bawn, is a large, oil-on-canvas by 19th century English artist Samuel Barry Godbold estimated at €3,500-€4,500. The artist visited Ireland regularly in the 1860s, and this painting is an idealised, romantic image of an Irish peasant girl in traditional dress carrying a creel of turf.

Seymour married the king after he had ordered the execution, by beheading of his second wife Anne Boleyn. Seymour’s tenure as queen of England lasted just over a year, and she died after giving birth to a son, the future King Edward VI. Holbein was court painter to the king. His famous portrait of Henry VIII was destroyed in a fire but is known from various copies; his very famous portrait of Jane Seymour is, today, in the Kunsthistorisches Museum in Vienna, and this version is believed to one of many versions made by his followers. Sheppard’s said it had been consigned by the estate of “a deceased Irish-American academic and it was originally acquired in the 1960s from a gallery in Bond Street”.

Among other highlights: Lot 80 is a “a Roman marble portrait head of a man”, dating from circa AD 300 which was acquired by the present owner in Italy in the 1960s (€3,000-€5,000); and Lot 947, is a Nigerian boxed set of six numbered silver napkin rings, each in the form of a “manila”, a west African unit of currency, bought at the British Empire Exhibition in Wembley, London, in 1924 (estimate €150-€250). Viewing begins Saturday, March 10th, at 10am, and continues Sunday and Monday daily from 10am-5pm. For catalogue and online bidding details see sheppards.ie

It’s our 20th wedding anniversary. I wonder will he remember
8

In Irish orphanages, being ‘coloured’ was a defect. I wish Mam had lived to see Black Lives Matter
9

Irish family stuck in Cyprus: ‘We hope our flights home are cancelled’
10

Vacation once again: A night at a campsite, a five-star hotel and a full-Irish B&B
Real news has value SUBSCRIBE