With Leaving Cert results out, the struggle to find student accommodation has begun 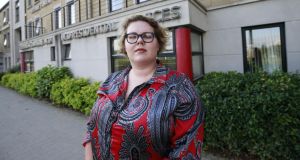 Ailbhe O’Halloran, UCD accommodation officer: “We have situations where students are putting down deposits on places in Dublin even though they might end up going to college in Galway.” Photograph: Nick Bradshaw

Students across the country are struggling to find accommodation as the annual start of college looms in September.

A shortage of accommodation has driven prices upward to a point where many students – especially in Dublin – are simply not able to afford.

The situation is becoming increasingly untenable for students, many of whom have no income of their own and rely on parents, guardians and grants to pay for their education.

Ailbhe O’Halloran works with the UCD Students’ Union as its accommodation officer. She is expecting the shortage of accommodation to come to a head in the coming weeks, as Leaving Certificate students get their CAO offers of college places.

“In UCD, only 1,000 spots are reserved for first years, but we’re expecting 5,000 new first years in September,” O’Halloran says. “That means that just 20 per cent of incoming first years will get a spot on-campus. The other 80 per cent are just casting around for anyone who can help them.

“I’m already getting calls from concerned parents. We have situations where students are putting down deposits on places in Dublin even though they might end up going to college in Galway.”

O’Halloran says the situation is getting worse each year. On-campus offerings – which have also risen in price in recent years – fill up quickly and are in high demand, meaning that thousands of students are left to find private lettings, which are in short supply.

O’Halloran says a student would be lucky to land a single room in Dublin for €500 a month and, in a lot of cases, students end up paying that for a bed in a twin room. She says a double room could range from €600 to as much as €1,000 a month – a cost that will be unsustainable for most students.

“Some students have turned down places in UCD to go to Belfast or Cork instead where it’s easier to find a place to live. We have students commuting from Cavan and Limerick on a daily basis and sleeping in cars around exam times, because that’s the best they can do.”

She adds that digs (a rented room – often with meals – in a private home) can be a great solution for some students, but the arrangement can lead to issues in some houses.

“A homeowner can earn up to €14,000 a year tax free if they take students into their home, which is wonderful and a great incentive. But that means someone could charge €1,500 a month. That’s fine if they’re taking two or three students, but there are people out there asking for €1,800 a month for a twin room. They can have crazy curfews and sometimes they aren’t allowed to use the kitchen, and some of them won’t let you stay at weekends.”

“In the past two years in particular it’s been getting harder,” she says. “When I started in Galway five or six years ago, accommodation was easy enough to get and was relatively affordable. However, now what we’re seeing is that a lot of people are having to go into digs, which isn’t ideal for some students.

“There is a student village, but that tends to fill up between February and April, and after that it’s a waiting list, so it’s quite difficult for first years.”

No place to stay

Reilly says there are “definitely students out there who have to take a year out of college because they are struggling to find somewhere”.

“We did a survey at the start of last year and found that one in six students didn’t have a place to stay by the time the semester had started. It’s gotten to the point now where tenants don’t have any power or say. Students have to take whatever is out there, otherwise they have nowhere to live.

The situation is also proving challenging for students in Cork. Alan Hayes, Students’ Union president at University College Cork (UCC), says “accommodation is not always affordable or suitable to the needs of students”.

Hayes hasn’t come across students who have had to defer or turn down a place in UCC as a result of the housing crisis, however, he says that students are ending up in places that are not ideal.

In particular, he says that digs accommodation can leave students more vulnerable than those living on-campus or in other situations.

“The student may be kicked out of their accommodation with no notice. Also, deposits can become a problem. Some students in the past have been expected to pay deposits before even visiting the accommodation.”

O’Halloran from UCD says the Government needs to introduce rent caps for student accommodation – or the situation will continue to spiral in years to come.

WHAT CAN STUDENTS EXPECT TO PAY FOR ACCOMMODATION

Students can expect to pay more to live in Dublin than other cities. However, rising rents nationally mean that finding cheap rent may be a challenge.

There are four main options to consider: on-campus; off-campus accommodation complexes; private house-shares; and digs. These options vary significantly in price depending on location and what’s on offer.

Living on-campus is convenient but can be expensive, particularly in Dublin. Many are already fully booked but, if in doubt, check with your college to see if they have anything available.

If you’re planning on going to Maynooth University, its cheapest single room costs €6,100.

College rents are cheaper outside of Dublin. NUI Galway’s cheapest single room costs €4,875. Similarly, if studying at UCC, expect to pay €4,958 for a single room.

Meanwhile, University of Limerick’s cheapest option is €4,488 for a single room in an eight-bedroom house.

Rooms in purpose-built student complexes tend to be more expensive, often by a considerable amount. These off-campus offerings are privately owned and cater exclusively for students. They often have perks like on-site gyms and cinema rooms. For a single room in one of these complexes in Dublin, you can usually expect to pay at least €230 a week, with some rising to more than €250 a week. These prices are usually inclusive of bills. Some also offer contracts that are longer than the college year, so you may end up paying for an empty room during the summer months.

Outside Dublin, rates are more competitive. A new offering in Cork has prices starting at €210 a week for an en suite bedroom. However, this is still more expensive than many private rental options in the city. In Galway, a similar style complex exists with rent paid yearly instead of weekly, coming in at €4,875, however, electricity and utilities cost extra.

The cost of private rentals has also gone up considerably in most of Ireland’s cities in recent years. However, this option can often be cheaper than a room on-campus or in a student complex.

According to the most recent Daft.ie rental report, south Dublin is the most expensive place in the country to rent, with a three-bedroom house costing an average of €2,104 each month. At that price, three students sharing would be paying €700 a month each, excluding bills.

By comparison, a three-bedroom house in north Dublin came in at €1,581 on the report, and in west Dublin it was €1,625. The cost will be lower again if the student is prepared to share a bedroom.

The real problem with private rentals for students can be finding a landlord who will take them. With housing shortages affecting most Irish cities, it’s a challenge for a group of students finding a house to share, and many landlords may seek a 12-month lease.

Digs can be a great alternative, where students can rent a room in an owner-occupied property. This offers home comforts and security you mightn’t get in a house-share and sometimes includes meals. Prices can vary hugely though, depending on what’s being offered.

Students can search for available rooms in houses on websites like Daft.ie or can get in touch with the relevant college students’ union for advice and support.