Are you strong enough for the nightmare within your brown bin?

Unless you are a hardened horror addict, try and see the version without salmon left-overs or mackerel innards 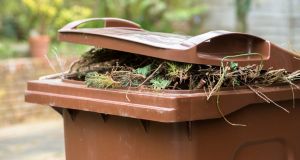 The result is pretty chilling and there have been reports of faintings and people running away in terror from ‘Their Brown Bin’.

The 2018 summer blockbuster is out now, but a word of warning, it’s a horror and not for the faint-hearted. Coinciding with the hottest summer in over 40 years, this one is a boiler and will test you to the limit.

Do you dare to go and see it? Are you strong enough for the nightmare within? It is called "Your Brown Bin" and it’s on general release all over the country (although some more rural venues may not yet have it).

Loosely based on the novel Remains of the Day the plot centres around a paper thin recycling bag and hosts an array of stars from Norwegian bad boy Salmon Left-Overs to well known Irish star, Mackerel Innards. There is a huge supporting cast of blue bottles and their side-kicks "Maggot Ensemble".

The result, it has to be said, is pretty chilling and there have been reports of faintings and people running away in terror from "Their Brown Bin".

“It’s worse than I thought” said one visibly shaken woman who had just seen ‘Her Brown Bin’. “For God’s sake don’t bring children to see this. It should definitely be certified 18.” she said.

For those who live in areas where "Your Brown Bin" has not yet been released, it can basically be described as a much scarier sequel to the Black Bin franchise which has been around for yonks but which never made quite the same impact.

"Your Brown Bin" has benefitted (if that’s the right word) from some very intensive casting which brings together a veritable smorgasbord of talent. Some contributions are a little over-cooked while others have been described as raw and slightly tangy but the thing they all have in common is that they are all in "Your Brown Bin" and the results speak for themselves.

Of course we have seen similar performances in the classic "Your Black Bin" which can still pack a punch, but critics agree that as far as the horror genre goes, "Your Brown Bin" is where it’s at.

It has been said that the real key to the success of some of the more nightmarish elements of "Your Brown Bin" was the late inclusion of Wooden Kebab Skewers (a lesser known Adriatic troupe which purists argue shouldn’t have been in "Your Brown Bin" in the first place but which were put in there anyway).

It is these seemingly innocuous little critters which reveal their true deadly capabilities right at the end of "Your Brown Bin" which gives the whole saga its stomach churning twist. Let’s just say, without giving too much away, these guys definitely tore holes in the plot.

There were some surprise performances from Food Soiled Paper Napkins and Pizza Boxes which were not expected in a horror of this kind but promoters say they are allowed and give audiences a little respite from what would otherwise be an unrelenting gristle fest.

For some, "Your Brown Bin" is just too shocking to be of any value at all and there have been calls for its running time to be shortened.

“Two weeks is just too long for a summer release,” say opponents. “There needs to be either a censoring of content or a much reduced turn-around.”

A week has been suggested as a more appropriate duration for a horror show with graphic content of this kind.

If you do intend going to see "Your Brown Bin" over what’s left of the summer, here are some tips on how to mitigate a potentially hair-raising experience. Currently it is on general release and inexplicably certified PG. Very young children are best kept away. Anecdotal reports show that teenagers have largely shunned "Your Brown Bin" which is perhaps unsurprising given their lukewarm response to "Your Black Bin".

They should be encouraged to see it however as it has some good educational features and if nothing else is a salutary lesson in "what lies beneath" as well as "what lies ahead".

Parental Guidance is absolutely advised for children under 12.

Unless you are a hardened horror addict, try and see the version without Salmon Left-Overs or Mackerel Innards whose inclusion some say is a mistake. If unavoidable then go to see the one where they are frozen solid before their appearances and only come in at the very end on the final running day.

It’s a good idea to see it at night rather than the matinee show as many of the "extras" are less visible and performances less dramatic and blood-curdling .

At the end of the day if "Your Brown Bin" is just too scary for you, why not check out other less gristly summer releases instead. The heatwave has thrown up a few surprise gems such as; "No Bigger than a Golf Ball – The story of this year's Queens" "The Kimchi Way" (straight to bin version) "The Mystery of the Missing Sparkling Water" "Where’s the Broccoli?" "The Cat Who Came in from the Heat and finally drank Water from a Bowl" "Ryanair Cancelled My Flight to Spain. Thank God. – A True Story" and finally, "Midsummer Backstop Mayhem", a tense thriller/screwball comedy from across the water. You really won’t know whether to laugh or cry.