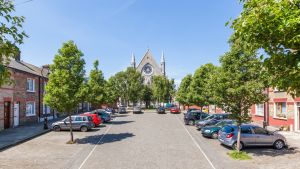 When the owner of number 9 Fr Matthew Square, just off Church Street in Dublin’s Smithfield, bought her home 16 years ago, it was a sort of homecoming, for she was born on nearby Chancery Street. Her parents had met in the fruit and vegetable market where her mother worked in the family wholesale business. Her father was an arable farmer from then pastoral Lucan.

Working in the Abbey Theatre while house hunting, the owner was advised to try Smithfield by the Abbey’s then set designer Joe Vanek, a Tony award nominee and Irish Times Theatre award winner.

The square’s yellow and redbrick-trimmed properties were designed for Dublin City Corporation by then city architect, CJ McCarthy; they look across to the Gothic Revival Capuchin church, St Mary of the Angels on Church Street, which was in turn designed by his father, JJ McCarthy.

The current owner bought it in 2002 for IR£147,000, about €187,000, and extended the footprint to make the sitting room the size of the original ground floor, and adding a decent sized kitchen and shower room to the rear. The property now measures 72sq m/ 775sq ft and the owner is seeking €390,000 through agent The Property Shop. Its price has just been reduced from €405,000.

Upstairs there are two bedrooms, and to the rear a small yard faces north. There is pedestrian access to the square from Church Street, while vehicular access is via Beresford Street, which runs parallel to the church.