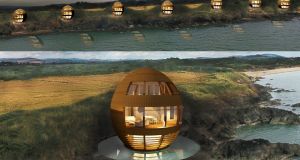 Docklands entrepreneur and property developer Harry Crosbie is seeking planning permission for a scheme of seven ovoid pods, to provide a retreat for academics or company executives on the north Co Wexford coastline.

Designed by Fergus Flanagan Architects, the proposed development has been inspired by the stone “beehive huts” in the monastic enclosure on Skellig Michael as well as by birds’ eggs and perhaps even hollowed-out Halloween pumpkins.

Located on a 12-acre site at Kilpatrick, owned by Mr Crosbie, he said the scheme “will be marketed internationally to large organisations and academic institutions, as a place of intensive work and study for decision-makers and industry leaders”.

He added that there was “an ancient tradition dating back to the 6th century of holy men beginning with St Gorman – whose cross lies nearby, fallen but undamaged – going into retreat or hermitage in rude stone structures along this north Wexford coast”.

Describing it as “a modern interpretation of this life of retreat and contemplation,” Mr Crosbie said the emphasis would be on “comfort rather than luxury”. The pods would have “basic self-catering facilities and a work station”, with a separate communal dining room.

Mr Flanagan said his concept “had to inspire people to want to come to this place from all over the world”. Thus, “it had to be unique and yet it was very important to our client that the scheme had to feel Irish and seem as if it was naturally part of this place”.

He said the Kilpatrick site had “uninterrupted, incredible views” of the Irish Sea to the east. So he had looked at the historical precedents for coastal architecture, such as Skellig Michael, as well as “natural coastal forms” such as birds eggs in a nest.

The architect said the arrangement of the seven three-storey pods had also been based on “the principles of music, with each of them representing a musical note”. And their setting in the dunes would help to “isolate the pods and create a sense of privacy”.

Each pod would be accessed from its landward side by a short bridge leading to its middle level, the living level, with an en suite bedroom beneath and a working level above, all contained within a curving timber shell held together with “glulam” beams.

“The upper level is designed to motivate the occupant, orientated towards the sky and the stars,” he explained. “This level offers a spill-out balcony with which the occupants can break out to taste and smell the sea air, and get a real sense of place.”

If the development is approved by Wexford County Council, Mr Flanagan said it would “put Wexford on the international stage as a place where world decision makers and industrial leaders would desire to come to” while also providing a unique attraction for passers-by.

Mr Crosbie, who has been in and out of Nama (National Asset Management Agency), said the scheme would not proceed “until we have agreed a joint venture deal with a world-class institution or university”. This was necessary to reassure people that it would not be another cluster of holiday homes.