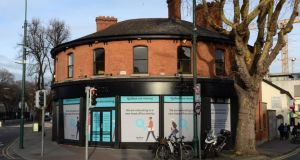 It’s the end of an era for two Ballsbridge estate agents who for more than a decade have slugged it out across the street from each other in Dublin’s prime property heartland.

In recent weeks Quillsen – formerly Gunne – vacated its landmark curved headquarters at the junction of Shelbourne Road and Pembroke Road. The prominent corner building is where Gunne originally set up business, in 1984; according to Quillsen director Marian McQuillan, the lease was due to run out shortly. The 10 staff have been relocated to Quillsen’s Ranelagh and Terenure offices, and the agency is now on the lookout for a new premises in the Dublin 4 area.

In an ironic twist, the new tenant on the corner site will be none other than Sherry FitzGerald, as its remaining residential and new-homes staff prepare to quit the premises across the road now occupied by Cushman & Wakefield.

Sherry Fitz took on a leasehold on its Shelbourne Road premises in 2006, but following Cushman & Wakefield’s takeover of Sherry Fitz’s DTZ commercial-property business last year, the bulk of Sherry Fitz staff have moved to a new Sandyford premises. It’s envisaged that Sherry Fitz’s remaining Ballsbridge residential staff and the new-homes team, under Ivan Gaine, will now conduct their business from the former Quillsen building.

Meanwhile, up on Merrion Row, in Dublin 2, there’s a new kid on the block. In a spruce new corner premises, Herbert & Lansdowne is a sales, lettings and property-management specialist that follows the recent merger of Herbert Property and Lansdowne Property under Paddy Markey and Iris and David Devine.