Period grandeur without the Big House blues for €595k 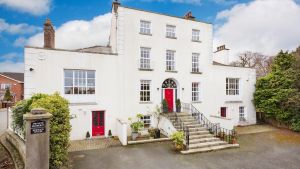 If you like the idea of apartment living but find the cookie-cutter layouts of most modern apartments leave you cold, then number 2 Berwick House might be right up your street. This three-bedroom duplex, housed in a late 18th century house, on Whitehall Road in Churchtown, feels like a bone fide period home minus the maintenance of gardens and grounds.

It’s the kind of property that is commonly found in European capital cities but tend to be rare as hen’s teeth here. It is one of just four owner-occupier units in the three-bay period property, which was converted in the late 1970s. There is one apartment in each of the property’s wings and one more situated mainly at garden level.

Number 2 has the benefit of the grand granite-stepped entrance, original front door and fanlight. While set over three floors, most of the accommodation is on the two floors above the hall, the original vestibule, at the top of the steps. The ceiling heights here are lofty and its 12-pane sash-style window streams light in. A set of stairs wind up to the first floor, where the living room and interconnecting dining room open off the large hall, a space of almost 12sq m flanked by two large sash windows. The kitchen is to the front and is small when you consider the property extends to 114sq m/1236sq ft.

It feels like a real home, as opposed to transitory accommodation, which can be an offshoot of apartment living

The reception rooms are impressive. With ceiling heights of over 9ft and low-set windows that fill the walls, the interconnecting rooms feel bright yet incredibly private, despite the fact that the original grounds were sold off years ago to build Berwick Hall, a development of townhouses that is visible to the rear.

The rooms are filled with the owners’ belongings and it feels like a real home, as opposed to transitory accommodation, which can be an offshoot of apartment living. In the living room, a large velvet sofa and Victorian armchair are set around a corner fire with a Georgian fireplace and gas insert. This is a room that will look good either dressed with period furniture or contemporary-style seating.

Off this is a conservatory that gets sun from the south, west and east and the current owners have judiciously positioned blinds to block its rays. Outside is a small terrace and from here there is a view to the 16th hole of Castle Golf Club.

Double doors from the lounge open through to the dining room, and a new owner might consider relocating the kitchen here.

The accommodation is on the next floor where there are three bedrooms, two good doubles and a smaller room that could fit a queen size bed. All have built-in wardrobes and deep window sills crying out for upholstered window seats.  This isn’t an apartment for elderly downtraders as there are too many stairs to navigate, but it could work well for a family possibly trading down from a larger period property.

It is worth noting that 35sq m of the apartment’s overall 114sq m is taken up with halls and landings, three in total.

Management fees per unit are about €1,440 per annum and the property is managed by the four owner-occupiers. There is communal parking to the front.

The property is seeking €595,000 through agent Sherry FitzGerald.

Welcome to my Place ... Leiden, The Netherlands
9