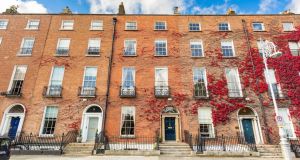 In what has been a challenging year for the property market a recent industry report flagging a weakening in prices at the upper end of the Dublin market didn’t come as a major surprise. But a run of swift recent sales at this upper end of the scale would suggest otherwise.

The Knight Frank Prime Global Cities report showed that prime residential prices in Dublin fell by 4.1 per cent in the year to September 2020. Prime properties are typically defined as the top 5 per cent of the housing market, and in Dublin this translates to properties priced at about €950,000 or more.

In late October number 44 Fitzwilliam Square came to the market seeking €3.5million. The beautifully restored Georgian home of late developer Paddy Kelly was always going to entice good interest, but selling within just two weeks for €3.5million (to a Dublin based buyer) was a fast turnaround by any reckoning. According to Lisney selling agent David Bewley: “The number of properties selling might be down, but since we came out of the last lockdown we have been pleasantly surprised. Properties that are on at the right price are doing well.”

His colleague in south County Dublin, Rory Kirwan, agrees. “I don’t think that I have experienced the high end of the market as strong since the boom. If anything we have seen a strengthening in activity and the prices achieved.” In July, Kirwan was joint selling agent with Daphne Kaye of Seaspray and Windward, two properties on one coastal site between Sandycove and Dalkey for €6.2m. The off market deal will be one of the biggest of the year, and took place during lockdown.

Ray Palmer Smith of Knight Frank Ireland says the annual drop in prime prices in the Prime Global Cities report is mainly accounted for by a sharp fall that took place in the last two quarters of 2019, but since then there has been a steady reversal in prices. So the rate of decline is slowing; prime prices fell by 0.3 per cent in the three months to September 2020, with prices down by 0.6 per cent in the three months to June 2020. A limited stock of homes to buy is almost certainly fuelling competitive buyer interest.

Palmer Smith has just launched Monterey, a small luxury scheme by Richmond Homes on Sandymount’s Park Drive where prices are set between €1.7million and €1.9million. Prior to official launch last week four of the nine detached and semi-detached homes had already sold.

“If anything we’ve seen a massive jump since June. There’s a lot more market confidence and lots of different buyers,” says Palmer Smith pointing to a major shift in the expat buying market. “In the prime market expat buyers would normally comprise about 10 per cent of buyers, that figure is closer to 25 per cent of our active buyers.” In particular there has been a big uptick in buyers from North America, with the US its biggest expat market, followed by the UK (mainly ex London) and then Asia, where Hong Kong office enquiries are strongest.

Marian Finnegan, managing director of residential at Sherry FitzGerald agrees there has been a conspicuous increase in cash buyers in the prime market, both from Irish people trading up and down and overseas buyers especially expats from the UK, US and among Chinese buyers.

“Prime prices had been somewhat fragile in late 2018 and throughout 2019, but that trend changed from the beginning of 2020. Properties at the upper end of the market typically take longer to sell than average properties but the urgency of buyer demand has reduced this significantly. Many of the properties we brought to the market have gone sale agreed within four weeks of coming to the market and many of those for in excess of the quoting price.”

Recent examples include two brand new luxury homes by Seabren Developments on Highfield Road in Rathgar. Semi-detached three storey homes with lifts and basement levels they came on through Sherry Fitzgerald in mid-September seeking €3.25million each and went sale agreed almost immediately with the deal expected to close shortly. Another house – in the original Stringer style has also sold on the same road for over €3million in a swift off-market sale.

In Monkstown – where houses appear to be selling like hot cakes - Innismaan, a striking home on a teardrop site at Queens Park in Monkstown launched through Rosie Mulvany of Sherry FitzGerald just as the first lockdown lifted in July quoting €4.25million. It has since sold for more than €4million.

Meanwhile in Foxrock it didn’t look great for Woodberry - a fine six bed in The Birches - when it came to market just as the first lockdown descended in March. But following strong interest from multiple parties it sold for above its €2.975million asking price.

While there are fewer transactions taking place owing to an ongoing issue of limited stock the prime market has held stronger than might otherwise have been predicted last March. With few new homes to buy and a limited existing stock on offer further additional pressure is being exerted at the upper end by cash rich savers and expats keen to reconnect with home.