Cork auction to feature important women from War of Independence 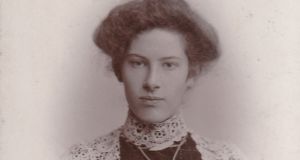 The Pauline Henley Archive will be auctioned by Hegarty’s auction house in Bandon.

At the beginning of the 20th century  just four women on the island of Ireland taught history at university level, and Cork woman Pauline Henley was one of them. She went on to become a published author and a formidable force to be reckoned with. Passionate about her country and its fight for freedom, her name comes up regularly among the papers and correspondence that survived this tumultuous time in Irish history.

Thirty-five years after the moving statue in Ballinspittle, statues are still causing controversy in the rebel county. But this time they are merely conceptual: the proposal to erect three new statues of revolutionary figureheads in the city was vetoed by councillors this month for not including any women.

In a subsequent radio discussion on RTÉ about which women should be considered worthy of a statue, one of the names mentioned was Mary (Máire) MacSwiney, the politician, educator and founder of Cumann na mBan in Cork in 1914. MacSwiney also established Scoil Íte with her sister Annie at their home at 4 Belgrave Place in Cork city.

MacSwiney, the suffragist whose brother Terence was the most famous hunger striker of the War of Independence, became leader of Sinn Féin in 1927, was interned in Mountjoy Prison and, like her brother, went on hunger strike.

Lot 10 is a handwritten letter from MacSwiney to Henley, addressed and dated from Mountjoy on November 18th, 1922. The letter, which is redacted in parts, refers to her own hunger strike and her concerns for her sister Annie as she worried that “it has not even begun to dawn on her that this may end fatally” (€1,000-€ 2,000).

There is also correspondence between Henley and Terence MacSwiney, the playwright and lord mayor of Cork who was arrested and court-martialled. Refusing to recognise the authority of British courts, he protested by going on a hunger strike that began in Cork city and ended with his death in Brixton prison 74 days later on October 25th, 1920.

His sisters’ vigil outside the prison until his death helped to bring international attention to the Irish republican campaign.

Lot 15 is a handwritten letter from MacSwiney to Henley, dated December 1916, which reads like a light-hearted exchange between friends. “Being always backward at my lessons, I entirely sympathise with you in your difficulties learning Irish,” he writes. “But isn’t it a compensation that to be assisted you’re thrown so much into the arms (metaphorically speaking of course!) of good-looking youths.”

A group of Irish prisoners, including MacSwiney, was released around this time and arrived back to Ireland on Christmas Day (€1,200-€ 1,800).

The entire collection of 50 lots is expected to realise in the region of €20,000.