Soon more apartments will be built here than houses, can we make it work like it has for our European neighbours? 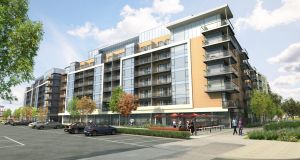 Round Hill Capital and QuadReal Property Group this week purchased 297 apartments for the private rented market at Blackwood Square in Santry for €123.5m

These days the skyline is telling a story. Unprecedented numbers of apartments are being planned and built here and seem to signal significant changes in how we live. Are we at last becoming more like our mainland European neighbours?

Apartment living, sometimes seen in Ireland as a poor cousin to owning a semi-d in the suburbs, may at last be on the threshold of entering mainstream living. Family apartment living has been standard in mainland European cities particularly since the end of the second World War.

I lived in an apartment on the third floor of a complex on rue de Verneuil in the Saint-Germain 6th arrondissement in Paris, what we would call inner city, back in the 1980s. There were families, small children and prams, both above and below my apartment. It was fine . . . and it was the norm.

So, a quiet revolution may be happening as we transition towards more urbanised, urbane and latte-drinking chic. Taking the lift 10 floors up, rather than taking the car 10 kilometres out, has its own appeal.

Are we going to become a nation of tenants to foreign landlords again? Well, it’s not quite the same. This is 2020, not 1820

A word of caution. Apartment buying is very different to house buying. A house, including a terraced house, is usually a legal standalone. Apartments are not standalone – physically, legally, or any other way. When you buy an apartment, you only buy the space that you occupy, but you share in the entire development. High-density apartment living is simply different. Not better, not worse, just different.

Government moves, such as allowing large developments to bypass the local planning authorities and to go directly to An Bord Pleanála, and also greater flexibility allowed in apartment designs, are a factor in the increase. The Office of the Planning Regulator report suggests that apartments are “key” to urban living.

But most of these new large apartment developments are not being built for individual buyers. They are being sold en masse to property development companies for renting. And many of them are overseas investors. So, are we going to become a nation of tenants to foreign landlords again? Well, it’s not quite the same. This is 2020, not 1820.

So, in renting terms, we seem to be again at the beginning of a second major shift in attitudes that brings us closer to our mainland European neighbours – as well as to US city living – with both apartment living and apartment long-term renting. This time renting from institutional property companies rather than individual landlords.

People wanting to buy, rather than rent, apartments will likely gravitate towards smaller new apartment complexes and existing apartment developments.

The pluses of renting include modern developments built to international standards without the grief of maintenance and plumbing and a leaking roof and the rest. Against that, renting is still always renting.

Large-scale apartment developments, such as the vast Cherrywood mini-city currently under construction in south Co Dublin, are increasingly being built for rent. US property development company Hines, with Dutch pension investor APG, will bring 1,326 apartments aimed mainly at the private rented sector on stream there over the next three years.

Other foreign property investors include Canadian-owned Ires Reit and the US property company Kennedy Wilson, which developed the Capital Dock area in Dublin. There may indeed be validity to the point sometimes made by Irish Institutional Property (IIP), the lobby group for institutional investors, that the large apartment schemes now being built would not even exist were it not for foreign investment.

Landlord and tenant legislation is hugely protective of tenants. The courts also tend to sympathise with tenants where the legislation allows

Whether justified or not, IIP says that costs are simply too high and that they cannot deliver a two-bed apartment for less than €463,000 – a price which Brian Moran, managing director of Hines, suggests is not viable for most people who want to buy. Hence the expected surge in renting.

But the terms and conditions of apartment renting are going to have to change. Traditionally, renting an apartment or flat in Ireland has meant renting short-term. The legislation – primarily part 4 of the Residential Tenancies Act 2004 as amended, designed to give some security to tenants – only provides for six-year cycles. But, even then, landlords can still demand possession during that period, where they can establish that they are selling, or significantly renovating, or want to move in themselves.

Landlord and tenant legislation is hugely protective of tenants. The courts also tend to sympathise with tenants where the legislation allows. There is nothing to prevent long security of occupation to tenants without the “I’m sorry but I need the apartment back because my son wants to move back in”.

There should be nothing to prevent a letting agreement or lease between a landlord – such as an institutional property company – and a tenant running for 20 years, or indefinitely, and with all sorts of tenant protections built into the agreement. Just read, and understand, the details.