Firm favourite with families on Waterloo Road for €1.55m 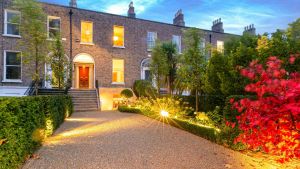 Waterloo Road’s popularity as a Dublin residential location is nothing new. In the 1840s, when the Earl of Pembroke began leasing portions of his Ballsbridge estate for development, it was on the understanding that spacious, redbrick houses would be built for “upper-class families”.

Dublin City Council archives and Thom’s Directory shed an interesting light on the inhabitants of the road. In 1913, Number 66 – a fine mid-terrace redbrick extending to 232sq m (2,500sq ft) – was listed as “a house with a small garden” owned by a Miss Josephine Major.

And as far back as 1862, 34 of the 89 houses on this desirable road joining Baggot Street at one end and Upper Leeson Street at the other, were listed as owned by women which is quite remarkable given the times.

Today many of these houses have been converted back to family use having operated as flats accommodation in the intervening decades.

“Since we bought the house in 2013 [for €1.3 million according to the Property Price Register] it has really changed, as there are now so many young families for our kids to play with,” says the owner of number 66.

“When we bought, the same family had lived here for 80 years, and very little had been done in that time. But we got a really good feeling from it and the locality is really magic for children,” she adds. Now they are trading “sideways” to gain an extra bedroom for her four young children.

The entire house was gutted and what comes to market is a fine three-bedroom family home in turnkey condition. The use of bold colours gives a contemporary feel to the house – especially the French navy used in the hallway and corridors.

“What’s really great about it is you don’t need to tidy anything away, as we put so much effort into storage so there is a space for everything,” says the owner who confirms she is a “neat freak”.

The hallway at garden level has an entire wall of chic custom-built storage units, met by more storage in a banquette seating area further along the corridor.

In addition, between the eat-in kitchen and third living room there’s an in-built pantry and separate utility allowing the kitchen space to be streamlined, despite the house being occupied by four small children.

At hall level, the interconnecting reception rooms are both now used as formal living rooms, with three bedrooms – two of which are doubles – on the top floor.

The house had a shared driveway with their neighbours which the family changed, so now each property has a separate vehicular entrance to the front.

Though the rear garden was described as being “small” in the Dublin City Council archives from 1913, it is anything but, given its location so close to the city.

Landscape architect Paul Doyle was tasked with designing the front and rear gardens. “We started by having vegetable plots in the front garden, and when we engaged Doyle he turned it in to something really special. In place of the vegetable beds he planted hydrangea and tulips – which are really wonderful in spring, and there is lots of space for the kids to play in the back.”

Though it is perfect for children with a big lawn and play area, there is scope to develop the rear garden further.

Number 66, is on the market through Sherry FitzGerald seeking €1.55 million.