Tanya Sweeney: Bare-bulb hipster chic is over but are we really going back to chintz?

Chintz is so busy it rarely looks dirty, with fabrics so durable they can be wiped clean 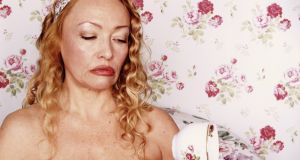 Are we really going back to chintzy interiors? Photograph: Getty

Here’s a sentence I didn’t think I’d be writing any time soon, or in fact, ever: one of London’s hottest restaurants looks like the love child of the Price Is Right’s prize haul and the TVAM studio of yore.

In the hipster enclave of Shoreditch, Gloria’s – boasting hundred-strong evening queues – is an ode to chintzy maximalism: think bamboo furniture, swathes of peach, frilly cream awnings, verdant planting hanging out of the ceiling, fabric lampshades, kitschy fringed cushions, tat until Tuesday. Not a brick, nor filament bulb, nor workbench in sight.

The industrial chic craze, now so ubiquitous as to be well beyond the point of authenticity, was always going to die a death. But really, are we about to chuck back in the chintz?

Very possibly. Restaurant reviewers have hailed Gloria’s throwback interior as right up to the minute, with the Guardian noting that its chaotic and colourful vibe is “kicking Brexit gloom up the a**e”. And given the austerity and murkiness of current world events, it probably stands to reason that our taste in interiors is likely to run to the rather playful, colourful and the soothingly feminine.

I grew up in Chintz Central, out in Blanchardstown

Interior design trends appear to run in cycles, which is why midcentury items – your drinks trolley and your spindly-legged sofa and your walnut occasional table – have been hot tickets of late. Given that logic, why shouldn’t chintz make a comeback? It’s an antidote to not just the industrial hipster look, but also the sleek, simple lines of Scandi design. Some say minimalist and clean; others might say non-descript and boring. Ikea has had more than its moment in the sun. Perhaps it’s time for Laura Ashley et al. to take back the bedding.

Chintz has one big problem in terms of a mass comeback: the word, which technically means “glazed, printed multicoloured fabric”, has become a pejorative byword for gaudy, cheap, spriggy, unstylish. It’s also been associated with ladies of a certain age for as long as anyone can remember.

I grew up in Chintz Central, out in Blanchardstown. Some on our road preferred the urbane, cocktail bar graphics of the 1980s, others a more eye-catching combination of brass, marabou and parquet. Our house, meanwhile, had bedside lockers covered in chintzy fabrics, floral tablecloths on circular tables in every room, curtains with frills, pelmets and ruches, pastel wallpaper borders. “Judicious” was not a phrase in my mother’s vocabulary.

It was fabulously fussy, in fact. I thought I was living in interiors paradise, and presumably my parents – both then in their 30s – did too. And for some reason, every time I stay in a room packed with the brightness and romance of chintzy detail, I find the sensory assault oddly soothing.

And chintz isn’t just comforting. Given its origin, as a heavy cotton material originally imported from India in the 17th century, the look is also utilitarian. Originally, the Victorians employed it to protect their furnishings covered in velvet or damask. Chintz is so busy that it rarely looks dirty, and the fabrics are so durable that they can be wiped clean.

Chintz may seem like the quintessential 1970s/1980s look, but it has weaved in and out of favour for centuries, and has a more storied and exotic past than you might think. By 1680 more than a million pieces of chintz were being imported into England per year, and a similar quantity was going to France and the Dutch Republic. A few decades later, the trend reached fever pitch so much that the French and English mills worried for their own futures. In 1720 England’s parliament enacted a law that forbade “the Use and Warings in Apparel of imported chintz, and also its use or Wear in or about any Bed, Chair, Cushion or other Household furniture”.

Whether Laura Ashley can rise, phoenix-like, from the ashes to reclaim a spot in the mass market is hard to say

The 20th century also saw the popularity of chintz come and go. After the first World War, chintz fell partly out of fashion, but came back into vogue in the 1940s, then again in the late 1960s and early 1970s, as part of the renaissance of quality fabric houses such as Colefax & Fowler.

There have been minor comebacks: Cath Kidston, Anna French, Liberty and Designers’ Guild have managed to carve out a niche for themselves in the market. Still, some might say that rumours of a renaissance proper have been greatly exaggerated. Laura Ashley saw its profits wiped out at the end of 2018: total like-for-like retail sales were down 4.2 per cent in the 26 weeks to December 31st.

Whether Laura Ashley can rise, phoenix-like, from the ashes to reclaim a spot in the mass market is hard to say. But there’s no doubting that experts might suggest using chintz sparingly. “More is more” certainly did have its place in interiors back in the day, but it’s unlikely we will see a return to the suburban excesses of the 1980s. Chintz in the 21st century is only likely to work as an opulent accent paired with fresh, modern elements.

Besides, if something is being touted as a palate cleanser to the gloom of Brexit, what’s not to like about that?