If TV is the drug of the nation, consider my prescription filled

Tanya Sweeney: Some of the intelligentsia like to say ‘I don’t even own a TV’ 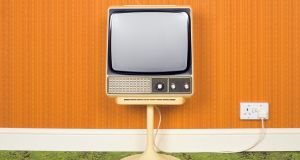 The TV is still very much at the heart of the family living room.

I always joke that my first job wasn’t working in the local pub, but as a TV remote control in my own sitting room. Being the more limber and impressionable member of my family, I was instructed to hop up to the TV unit and flick from channel to channel until we fell upon something vaguely watchable.

I’m showing my age a bit here but, as was the trend back in the day, the TV was a huge, deep box of grey plastic and faux walnut, that would seemingly offer a clear reception if it felt like it. My workload doubled when we got the VCR: the first family on our road to do so. For a while we were fairly popular, even if it meant my workload had doubled.

I thought about all of it anew when Sony’s new research report was released earlier this week. In conjunction with the report, a series of nostalgic images was commissioned depicting living rooms from the last 50 years. There was the bold, showy futurism of the 1960s; the explosive pattern overkill from the 1970s, the Laura Ashley pastels of the 1980s, the sleek yuppie lines of the 1990s, and the minimalism of the present day. In each scene, there was a commonality: the TV unit – from yesteryear’s wooden cabinets to today’s unobtrusive “media unit” – was at the very heart of the room.

The Sony report threw light on some interesting data: only 6 per cent of TV viewers now watch TV live, meaning that prime-time TV is an endangered species. Received wisdom would probably dictate that householders are in separate rooms, getting their televisual fix, individually, on separate devices. But Sony’s research seems to contradict this, noting that the TV is still very much at the heart of the family living room.

And it seems that size indeed matters. The average living room has evolved to resemble a cinema experience – with a massive 81 per cent of people watching programmes and movies on their TV. Over a third of people now want a TV that is over 55 inches.

What’s more, 16 per cent can’t live without a living room featuring a 65-inch plus set as the focal point. The average TV in the 1960s, by contrast, was around 10 inches. A large TV is so desired, in fact, that one-in-10 see it as the ultimate status symbol, more so than smartphones and tablets, designer clothes or expensive watches.

Could it be that binge viewing culture and the “golden age” of TV has prompted us to recreate the Cineplex experience in our homes? There’s no arguing that Line Of Duty or The Virtues are greatly enhanced by surround sound and high-definition imagery. Must-see TV creates a situation whereby it becomes a communal experience; a situation where friends and family can pore over a TV show’s details and indulge in some serious punditry.

But as to whether a massive TV is seen as a status symbol, the jury is probably still out. A friend of mine – hugely well-read, intellectual, middle-class – visits my house occasionally. Without fail, her eyes fall on my 43-inch smart model in the living room, surrounded by bells and whistles like chromecast devices, Apple TV, DVD player, and speakers and she exhales sharply. “That is a massive TV,” she murmurs. Call it a hunch, but I don’t ever think it’s a compliment. And it’s certainly nothing to do with envy.

Is there an element of snobbery at play here? Is pop culture asceticism some sort of a virtue now? There’s a certain cohort of the intelligentsia that is fond of saying things like, “I don’t even own a TV”, or “I haven’t watched television in absolute years”.

It’s usually said as a point of pride; as if following Game of Thrones, Love Island or the Eurovision Song Contest is an activity for basic plebians and telly watching is the balm of the lower classes. Of course, they’ll sit and watch any old tripe in someone else’s house, and know all the characters’ names in Killing Eve, all while reminding you that they don’t own or never would have a TV themselves. Repeatedly.

Another friend made an interesting observation about why the TV was constantly on in her sitting room; far more than the supposed average of two hours and 28 minutes that Irish people are said to spend watching television.

“I grew up in a working-class house,” she says, by way of explanation. I thought it was a curious observation, as though she felt the two were somehow linked.

Either way, I’m not giving up my oversized screen for anything. There’s a reason TV is still at the heart of the home: it’s the perfect way to unwind and transport your mind elsewhere, after a stressful day. If TV is indeed the drug of the nation, you can consider my prescription filled.