Mind the property gap between generations 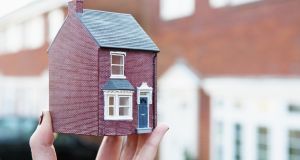 Owning a home is a more elusive goal then ever for twentysomethings. Photograph: Getty

Every so often, my dad and I drive around Rathgar, Rathmines or Portobello in south Dublin. “I used to live there before I got married,” he often says casually, pointing to an impossibly grand period property where he lived, aged 21, one which is probably commanding a hefty rental these days.

Last week, he mentioned the first house he bought after he married my mother, out in Blanchardstown. It was a new three-bed semi, bought for £6,000, which my dad insists was a king’s ransom in the late 1970s.

He then dropped another bombshell. My parents had purchased the house, and then stayed in their flat on Portobello’s Harrington Street, for well over a year. At 26, they paid both a mortgage and rent until I was born, at which point they had just about gotten around to buying a washing machine and fridge.

My parents weren’t in any way rich. They certainly weren’t the lucky benefactors of a tidy inheritance or anything like it. But can you imagine any twentysomething couple being able to afford to leave a newly purchased, turnkey property lying empty for over a year?

I soon realised that for every Irish person facing the frustration of tiny studio flats, crowded viewings and spiralling house prices, there’s another watching the current housing crisis at a remove. Often of the Baby Boomer generation, aged between 54 and 73, they are watching rising rents and lending criteria much as they would watch a natural disaster unfold in another country. They’re aware that things are terrible for a vast swathe of people, but much of the reality seems near-inconceivable.

The boomers have clearly won the age lottery. Much like my parents, coming up with rent or a mortgage repayment for those in steady employment wasn’t necessarily the sort of thing to cause night after night of wakeful worry.

In an ideal world, the boomer’s Irish property trajectory ran a little like this: the first stop was a tiny rental in Dubln 6 flatland, before an upgrade to an artisan cottage somewhere along the DART line. Once children came along, it was time to find a suburban doer-upper, to be refurbished room by room. There might have even been enough in the kitty for an investment property or holiday house along the way.

For Generation X (currently aged between 39 and 53), the trajectory had shifted along with the wider changes in the country. Much like our parents, we stayed in tiny bedsits during college, often two to a room. Phibsborough, Cabra and Stoneybatter were our stomping grounds, as Rathmines was paradoxically too “studenty” for us.

Next, we took to renting newer, slightly bigger apartments slap bang in the city centre. They were, in hindsight, dastardly 1990s builds with magnolia plasterboard walls and about as much soundproofing as a paper bag. Yet out our single-glazed windows, we could see Christchurch/Temple Bar/the Ha’penny Bridge, and thought we were living our best lives.

Our first property purchases were often prompted by our parents’ collective refrain that rent was money down the plughole. It was probably a 110 per cent mortgage, too, used to secure a small apartment or one-bed cottage in Dublin 8 for €400,000.

But it is the generation that have come after, millenials born between 1981 and 1996, that have had an even more short-straw experience. Not for them the formative experiences of the bedsit; in fact, any kind of apartment is seen as less a stopgap and more an aspirational end point. Many young twentysomethings can barely conceive of affording to live alone, much less owning their own property. The more optimistic ones have done the maths and figure they might be able to get their hands on a deposit – often, a huge sum north of €40,000 – to buy somewhere by the time they reach 50, but only with enough scrimping and saving, and the help of parents who don’t mind accommodating them for a significant stretch.

Yet with rents as they are, it’s a more elusive goal than ever. Others are resigned to the idea of renting indefinitely. But it’s when they get to 65 or 70 that the time bomb will truly detonate. There’s a slim chance rental measures will have cranked into gear and the situation somewhat stabilised by then; otherwise, they face paying extortionate rents on a pension.

A multi-tier system has emerged: at one end of the spectrum are older people who have paid off their large family home, or who have a small mortgage on a house in a leafy suburb, while at the other are the newcomers to the market who have to scrimp together €2,000 to rent somewhere smaller, in any area that’s not two hours from work.

The truth is, boomers (and to a lesser extent, Gen X-ers), with a comfortable toehold on the property ladder and their dues duly paid, will never understand or be able to empathise fully with the ongoing plight of the millennial looking for a place to call home. For now, all that millennials can do is look at the relatively smooth sailing of previous generations of property buyers, and wonder where it all went right for them.

“Living in a bedsit was perfectly fine for me, but they won’t have anything to do with them,” one Baby Boomer sniffed to me recently, as though every 20-year-old expects to walk into an architecturally-designed slice of heaven when they get their first payslip.

But the fact remains: the bedsit, with its two-ring hotplate and fridge in the hallway was perfectly fine for an older cohort of people, simply because it was temporary. Better times were almost certainly on the way. In the current climate, it’s impossible to say as much.