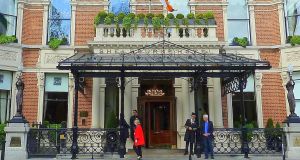 Who knew that fancy hotels could be among the riskiest places in Dublin? Compensation culture has claimed its latest victim, and the city’s purists are unlikely to be happy about it. After the Dean hotel’s “swing-gate”, it transpires that the Shelbourne is removing its iconic revolving door.

After half a dozen or so personal-injury claims, plus more than 20 reported incidents, the five-star hotel on St Stephen’s Green has reportedly obtained Dublin City Council’s permission to remove it.

Before you ask whether anything is sacred any more, the revolving door at the main entrance will be replaced with hinged doors similar to the originals that the hotel opened with, in 1867. The revolving door was introduced only in the mid-20th century, and the one that is being removed has been in situ only since the 1980s.

Still, if that revolving door (or its forebears) could talk, it would have tales galore of glamorous denizens, celebrity regulars and the odd political figure.

William Thackeray was an early fan of the hotel, and in the early 1900s Alois Hitler jnr, the half-brother of Adolf Hitler, worked there when he lived in Dublin.

At the height of their rakish adventures the actors Richard Harris and Peter O’Toole would hole themselves up there, and the latter would bathe himself in champagne.

Rather less ostentatiously, the hotel was also where Seán Ó Riada and Paddy Moloney decided to form The Chieftains and started to develop the famed Claddagh Records label.

Before even those illustrious moments, the Shelbourne was enshrined in literature, with a reference in James Joyce’s Ulysses.

And, given its proximity to Government Buildings, it has never been unusual to see politicians doing their business – and their unwinding – at the hotel. Charles Haughey was an habitue, as was PJ Mara. At the height of his powers as a Fianna Fáil spin doctor, Mara would reportedly brief the press in the bar every Friday afternoon.

More recently, the golfing champ Shane Lowry has been told he is welcome to drop in for a drink, after famously being refused entry on a Christmas night out in 2013.

Before its opening, in 1957, the famed Horseshoe Bar had been a reading and writing room for commercial travellers, who would use it to do their orders and invoices. It was also, for the briefest of times, a television room.

The owners enlisted Aidan Prior, manager of Brown Thomas’s interiors department, to implement the changes. He recruited Sam Stephenson, at that point a virtual unknown, fresh from his degree at Bolton Street School of Architecture. Stephenson would, of course, go on to become one of Ireland’s most famous architects, creating the Central Bank of Ireland and the first part of the civic offices on Wood Quay in Dublin.

Job done on creating an opulent space, the bar promptly attracted the city’s musical and literary luminaries, among them Ó Riada, Count John McCormack, Patrick Kavanagh, Brendan Behan and Seamus Heaney. (Behan, it is said, spent his earnings from Borstal Boy in the bar.)

The Grand Old Lady of St Stephen’s Green may be in line for a facelift, but that probably won’t affect either its illustrious past or its current reputation. The great and the good are still likely to make their way through the doors, however they may look.