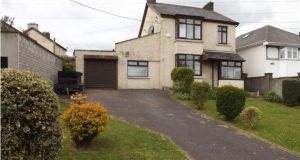 The five-bedroom house on Model Farm Road in Cork city for €395,000

James G Coughlan & Associates is seeking €395,000 for a five-bedroom house at 1 Farranlea Park on Model Farm Road in Cork city.

France, Brittany This three-storey “Bourgeois” stone house is on the outskirts of Retiers in Ille-et-Vilaine. It is is surrounded by a garden – with trees and shrubs in which there is also a stone cottage with an open fire, and a covered courtyard. Beneath the main house is a cellar and separate earth-floored wine store. Rennes airport and centre are under 45 minutes away.

Views from this 290sq m villa encompass Calpe rock, in the sea, known as Peñón de Ifach, and nicknamed “mini-Gibraltar”. The three-storey, eight-bedroom, five-bathroom villa is in a traditional style, with terracotta and white-tiled floors, exposed wooden beams and wide, curved, open doorways. It is a few kilometres from the beach which can be viewed from the terrace beside the livingroom (which has a fireplace).

Budapest opera house is close to this three-bedroom, three-bathroom city-centre apartment. Shops and eateries are a short walk away but the apartment is in a relatively quiet street. The 138sq m home is on the second floor and has a balcony off the livingroom. It is in a refurbished classical building and the apartment itself has also had a revamp.

On an island on the Colorado river, near the border with California, this house is in a gated resort. In Lake Havasu City, the 175sq m house has open-plan living and, as you would expect from the watery location, a garage that is deep enough to take a boat and a launch ramp nearby.