‘In the past I had so much money, but no life quality’

Meet the couple building a better way to live, for themselves and others, on Beara Peninsula 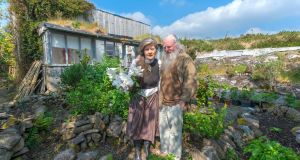 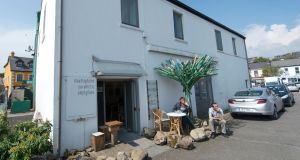 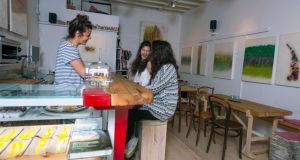 It’s the green wooden tree outside the old fishing shed on the pier in Castletownbere that hints at the nonconformity and creative vision awaiting within. This is the whiteRoom cafe, described in elegantly designed notices on the window as a meeting house, a gallery and performance space. There is a sense of big dreams mixed with a dollop of eccentricity.

This is the galley of a visionary ship helmed by a German couple, eco-architect Jergan Janssen-Jerom and his artist partner, Felicitas Gross, who retired from frenetic careers in Germany to live a simpler, purer life on the Beara Peninsula. Their first step was to build an ecological home for €15,000 out of cheap white deal into the cliff-face looking out onto Bantry Bay and from there they have begun to expand their vision, hoping to instigate a gentle collaborative revolution on the Beara Peninsula; creating networks of people, products and ideas to empower local society.

The whiteRoom cafe is what they term a “shareCafe”, where food and drinks have a suggested donation price to which customers are free to add as much or as little as they wish. “This is how human interaction should be, that everyone pays only what they can afford,” says Janssen-Jerom.

The cafe is as much a concept as a business. “Anyone can take ownership of it and run it however they like for €15 per day,” says Gross. “They can use it to offer their own style of cooking – seaweed cuisine, speciality coffees, homemade cakes. You could have a different type of cafe here every day and the staff would always be fresh and eager. The key is to give people the freedom to experiment, to establish new ventures without large costs.”

Upstairs they are developing a shareOffice, which by mid-summer will have 20 work spaces with a conference room, secretarial service, workshop room and a recreational space. “Normally start-ups pay around €2,000 per month for offices and equipment,” Gross says. “Here we offer it all for €150 per month, because we are non-profit. We have enough room here for 10 or 15 start-ups and small businesses.” They hope to attract people from all over Europe, as well as locals.

Later this summer they plan to open a small food market downstairs with a wood-fired pizza oven, a smoothie/juice stall and a tiny homemade bakery. The idea is that people can rent out the various stalls and spaces for €30-€50 per week as a way of experimenting with new food concepts, without becoming mired in debt. Eventually, this market will include a video wall consisting of a 2m wide interactive screen where people can shop virtually in stores in Dublin or Cork by steering a digitally controlled camera around the aisles.

“For 45 years I designed restaurants and shops in Germany,” says Janssen-Jerom. “They were open-plan, radically creative spaces with things like wood-fired ovens. I had my own jazz bar and the first ever art cafes in several German cities. Then I built a computer stocks and shares company in Switzerland, developing and distributing a Linux-based platform, until in 2000 I got very, very sick and the doctor said that I had five years left, so I gave away all my possessions and I came here to Ireland.

“I spent the first five years meditating and swimming every day while receiving Tibetan cancer therapy until I recovered. Now the aim is no more big income and no more big stress. My life quality here is fantastic. In the past I had so much money, but no life quality. For us it is vital that people have the chance of a new life, to try out a new idea and to team up in partnerships working towards a vision, rather than working for investors or banks.”

In tandem with their business- and food-sharing projects they are also developing a community-orientated software system called multiEngine@easyGoing, which offers safe and independent web and computer services based on the non-profit Indiegogo platform. The idea is to help people to free themselves from the corporate stranglehold of software monoliths by offering a system that unites all their various computer services on any device anywhere in the world using intelligent task management.

All these disparate projects form part of an overall vision which they call Uisceadóir (their Irish translation of Aquarius), referring to the current astrological era, the Age of Aquarius, which is believed to be a time of expanded consciousness when humanity unites to form a mutually co-operative society on earth.

“We want to help establish an equitable, sharing-based society which is in harmony with the natural world,” says Gross. “Our first step was to plant thousands of trees and to build an example of a simple ecological home. For 30 years Jergan designed and built ecological houses in Germany. His speciality was functional building, based on Bauhaus, where every element serves multiple purposes. Passive-solar houses, deeply insulated.”

For eco-houses in the Irish climate Janssen-Jerom is keen to promulgate the concept of building layered walls, with air pockets, thick sheep-wool insulation and a series of wind/vapour membranes. “For the exterior timber cladding you can use cheap wood, as long as it is always breathing and dries out easily. There is no need for paint or varnish. The timber will turn hard, forming a silver weathered surface which is the best protection of all. We’d love to encourage more people to build with whatever cheap timber is available from the local provider, rather than always going for concrete.”

West Cork has by now experienced almost three generations of foreigners arriving with new ideas and outlooks, and has been transformed by them. Whether Janssen-Jerom and Gross manage to fully realise their vision of implementing Aois an Uisceadóra (an Age of Aquarius) in the area remains to be seen, but what’s clear is that West Cork’s alternative spirit is still burning bright.