Miss McAlister’s collection contains an early edition of Darwin’s ‘On the Origin of Species’ plus much, much more 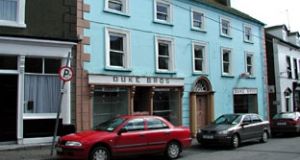 Duke Brothers on Market Street: it took six men six days to put the books into 1,674 boxes and three articulated lorries to transport them to Kells

How do you sell a library? Not just any old library, either, but a whopping 25,000 books, assembled over a lifetime by a woman who was happy to live on toast and margarine if it meant she could add to her collection of beloved books.

Such was the challenge for the auctioneer Damien Matthews, who is selling the library of Mary Colette McAlister in Kells next weekend. “She lived in a big vicarage,” he says. “She was very frugal – she spent her whole life saving, and bought books everywhere. It’s the largest library of books which has been sold in this country since 1986 and the disposal of Percy Paley’s library at Castle Hackett in Tuam, Co Galway.”

Miss McAlister’s frugality didn’t do her any harm – she lived into her 80s. But following her death last year, her house had to be cleared. It took six men six days to put the books into 1,674 boxes and three articulated lorries to transport them to Kells, where Matthews has installed them in the historic Duke Brothers building on Market Street.

“I got a carpenter in to make all these shelves,” he says. “It took him and his mate two weeks to put them up.” All those boxes then had to be unpacked and the books, as Matthews puts it, “unjumbled”. Sorting and cataloguing was a mammoth task. “There’s such a wide range of subjects. She wasn’t somebody who just collected, say, 19th-century books. She was interested in Irish history and politics. In science and religion. In Northern Ireland. She’d go somewhere and see a book and ask: ‘Does that book interest me? Okay – well, I’ll buy that.’ But she didn’t buy rubbish. The majority are first editions; serious books by serious authors.”

As we wander through the higgledy-piggledy warren of rooms in the hugely atmospheric house, part of which was used for many years by the eponymous brothers as a hardware shop, the scale of the collection gradually sinks in.

“Dublin Under the Georges,” says Matthews, reading titles at random as we go. “A Hundred Irish Lives. Paraguay on Shannon. George Orwell, 1984 – a facsimile of the original manuscript. A first edition of The Lessons of History by James Connolly. Japan Today. Here’s a big chunk of a book which she bought for 50 Irish pounds 60 years ago. It’s from the Earl of Roden’s library and it’s all about … God knows what. It’s in Latin.”

We drift past a shelf on Arctic exploration, which includes books by Robert Peary and Fridtjof Nansen as well as two large volumes entitled Scott’s Last Expedition. A brief dig into another shelf reveals a clutch of books on evolution, including an early edition of Darwin’s On the Origin of Species. There’s a large-format celebration of the opening of the Stormont parliament in 1921. There’s Coca and Cocaine, by William Martindale, from 1894. Any book-lover could easily spend a week in here, just browsing.

“Well, I’m doing an extra-long viewing for that reason,” says Matthews. “And that’s why we’re selling many of these by the shelf. Not all: but I just don’t have the manpower to manage it any other way. The shelves are numbered. Here’s a shelf: that’s yours. There’s no reserve on any of them. It’s all to be cleared. It doesn’t matter if it’s signed by Yeats or whoever else, I’m here to sell. If that shelf is worth a €1,000, great. If it’s worth €10, great. I assume there’ll be enough interest that things will find their natural level.

Matthews planned the sale to coincide with the Hinterland Festival, which will bring book-lovers to the town of Kells next week for readings by, among others, Sebastian Barry and Dermot Bolger. Hinterland is not just a literary festival, though: the input of Myles Dungan has ensured strong historical and political strands, and the presence of politicians and former politicians Danny Morrison, Mary O’Rourke, Alex Salmond and Chris Mullin will attract the very punters who will be interested in these latter-day books of Kells.

Among those which are being sold separately, rather than by the shelf, are Lot 857, a copy of Seán Mac Bride’s Nobel Prize speech, signed by the man himself, and Lot 870, the privately-printed story of a family which fled from Nazi Germany in 1941. Lot 248 has poems by Seamus Heaney and Michael Longley, produced by the Arts Council of Northern Ireland in 1968 and never sold in shops. Lot 1235 is Ernie O’Malley’s classic account of the years 1916 to 1921, On Another Man’s Wound, one of a special edition of 51 copies signed by the author.

Lot 283 is a “specimen relief” book, of the sort which would have been issued to every master of the workhouse in Ireland during the Famine years. Dated 1847, it divides the poor into two categories: the helpless poor and the able-bodied poor.

The “helpless” were further graded – or, perhaps, degraded – according to their degree of infirmity: “helpless from old age”, “crippled”, “idiot”, “lame”. Lot 270 is Bolshevism: Mr Keeling’s Five Years in Russia, an account of the revolution in Russia which belonged to, and was signed by, Constance Markievicz. If all human life isn’t in here somewhere, I really don’t know where you would find it.

The Hinterland festival runs from June 22nd to 25th. hinterland.ie