Spreading the word about our best-kept hospitality secrets 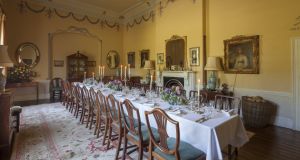 The diningroom at Martinstown, Ballysax, Co Kildare. The tables in many of these country houses can sit from 12 to 30 people. Photograph: James Fennell

“I love going to our meetings,” says Hannah Flynn of Roundwood House in Co Laois. Hannah is chairman of The Hidden Ireland organisation and it’s no wonder she can be enthusiastic about the role given that so many of her colleagues embody the resilience of some of Ireland oldest and finest properties.

They are close to her own age, have small children and share all the positives and pressures of running a business centred on their own homes. But cheerfulness isn’t sufficient to ensuring the hidden Ireland appears a little less hidden, and a three-pronged initial strategy is already in operation.

A new website designed by Adam Green was launched last month, and a levy was raised from each member property in order to fund the services of a marketing consultant, and the publication of The Hidden Ireland, by James Fennell and Josephine Ryan.

This gleaming book may look as if it is destined for the most authentic of coffee tables but no one denies that its real purpose is marketing. Although ostensibly concerned only with buildings and proprietors, it is fundamentally a marketing tool for Ireland itself, promoted through the power of property.

The 20 country houses gathered in the book’s pages share an ethos of hospitality, tradition and history and they are open for business: for holiday visits, for corporate affairs, for weddings, for house rental or bed and breakfast overnight accommodation. Several of them – Glenlohane, Temple, Hilton, Martinstown, Lorum, Ballyvolane, Ashley Park and Roundwood – also demonstrate the commitment of the younger generation to keeping the house in the family, no easy undertaking as Hannah Flynn well understands.

She and her musician husband, Paddy, took over from her parents, Rosemarie and Frank Kennan, at Roundwood in 2008, just as the recession began to bite. The anxieties of those first few years suggested they had made a bad decision. “But we realised how well the lifestyle suited us and we began to get into the swing of things – I had grown up with the business, after all. The real turning point for us though came when Paddy and I decided to swap our responsibilities in the house so that now he is very happy in the kitchen and I’m dealing with front of house, business management and promotion. We’re very positive now – things look great.’’

“This is a book we can send to all our key agents,” says Justin Green of Ballyvolane House, whose father, Jeremy, and late mother, Merrie, were founder members of The Hidden Ireland in 1987. “It’s a statement of our survival through a time of difficulty, of our ability not just to hand on to another generation but to reinvent ourselves, to diversify and above all to persevere.”

Perseverance demands investment, especially as 300-year-old houses are not readily adaptable to modern fire and safety regulations. Where they can adapt they do: wifi, for example, is generally available. Several properties lay their emphasis on retreat, on seclusion; others offer hunting and vintage motor-bikes, or fishing and the cooking of game, or gardens and greenhouses or fine libraries (an old barn at Roundwood has been converted to house Frank Kennan’s double-height library of civilisation); all encourage access to local antiquities, events and historic sites.

“There is still an appetite for the big house experience,” says Ann Cronin, Hidden Ireland’s marketing consultant. “We wouldn’t be in business otherwise. Our brand name is very well known and the Irish market remains very important to us, but we also need to attract events such as family gatherings or reunions where people might want to rent an entire house for a weekend, or to the needs of professional people and executives who want a chance to switch off: we have to show what we have to offer.”

Accumulated is a selection of enchanting bedrooms, gorgeously carpeted drawingrooms and galleried stairways, antlered halls hung with ancestral portraits, heritage china and glass on tables which can sit from 12 to 30 people in settings where an epergne (an ornamental centrepiece) is just another detail in the serving of excellent food.

Every roof shelters modern kitchens, sophisticated bathrooms and central heating. Restored outbuildings revive stable yards there are walled gardens, rare turf barns and acres of woodland, moor and river bank. These properties are mostly country houses of middle size (and some smaller than that) which still breathe the cultural context of Lady Gregory and Sir Hugh Lane, of Elizabeth Bowen and Molly Keane, of the landed Protestant and Catholic gentry who sometimes could afford to employ the best architects, sculptors, stuccadores and decorators in Ireland, and did so.

While Josephine Ryan’s text gives details of paint colours (Farrow & Ball from attic to basement), fabrics and hand-painted wallpapers, her stories of ownership and survival are variations on the theme uniting all the properties in the organisation’s catalogue, which extends beyond those featured in the new book.

They are displayed on the website, which reveals among other treasures the ebullient curve of the spiral “flying” staircase at Woodbrook near Enniscorthy or the embroidered ceilings at Ash Hill in Kilmallock. This publication celebrates with considerable justification such homes as Collon House in Louth or Frewin in Donegal or Mount Vernon in Clare, but it also demonstrates what Ann Cronin describes as the courage of the younger generation in making an investment in the future.

What is sometimes forgotten is that the major attribute of these country houses is that they have a lot of country to offer. In promotional terms access to motorways and airports is crucial but in this book the photography of James Fennell leaves no doubt about the magic of undiscovered ground. Six wide landscape studies are essays in pastoral romanticism.

A view from the terrace of Hilton Park in Monaghan is a vista of meadowland dimmed by morning mist and distance. This, above all, is what Hidden Ireland can provide: a sense of otherness, of being elsewhere, of being, if only for a few hours or a few days, out of the known world.

The Hidden Ireland by James Fennell and Josephine Ryan (Blackstaff) €30