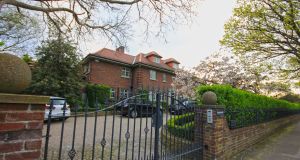 Cappalaune on Maple Road extends to 5,457sqft and stands on about 0.72 acres of south-facing grounds, which feature an outdoor swimming pool and tennis court

Colum Butler who, along with his brother Ciaran, is licensee for Starbucks’ Irish operation, has had a week of mixed property fortunes.

While the Butlers were likely satisfied about beating out the competition to acquire the property, Colum was probably less enamoured by Dun Laoghaire Rathdown County Council’s decision that same day to refuse his wife’s planning application for the demolition of their family’s Clonskeagh mansion.

Named Cappalaune, the Butlers’ house at 7 Maple Road extends to 5,457sqft and stands on about 0.72 acres of south-facing grounds, which feature an outdoor swimming pool and tennis court.

The house is easily the most impressive example on the highly sought-after Crampton-built street, however the Butlers had hoped to replace the house with a larger 11,345sqft version, noting that the current structure is dark “even on a bright day” and that maintenance is “constant and expensive”.

It was considered for a number of reasons that demolishing the house was preferable to avoid compromises, such as in energy efficiency, and because a complete re-build would be cheaper than substantially extending and integrating the existing building.

In spite of the gargantuan size of the proposed house, seemingly not an eyebrow was raised by neighbours as no objections were lodged with the council against the plans.

As it transpired the neighbourly support, or possible indifference, was of little value as the council decided to refuse the application.

In its decision, it stated that “the proposed development would (…) seriously injure the amenities and depreciate the value of property in the vicinity” and “would adversely affect the Maple Road streetscape”.

Irrespective of the council’s damning comments, the Block expects that the Butlers’ pursuit of the ultimate home will not end here, and the decision will likely be appealed or a new application submitted.

Cappalaune has had just three owners since its construction around 1949. From the 1970s until the mid-1990s, it was home to Celtic Tiger high-flyer Derek Quinlan, his first wife, Perdita, and their four daughters, before he departed for Shrewsbury Road. Quinlan is believed to have installed the tennis court and outdoor swimming pool. The previous owners were the Booths, whose family founded a tyre factory that evolved into Dunlop tyres.

Irishman in Sweden: Covid-19 testing is not widespread here
6

Villa oasis by the Forty Foot in Sandycove for €1.95m
7