Sword cane of Henry Paget who lost a leg in Waterloo and became Lord Lieutenant of Ireland sells for £8,000 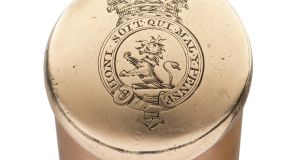 Sword cane detail on the handle. They were popular among gentlemen who feared being attacked and robbed in the streets

Until quite recently, self-restraint, reserve and the avoidance of any “PDE” (public display of emotion) were notable – and admirable – British characteristics. But the stiff upper lip began to wobble 20 years ago following the death of Diana, Princess of Wales and now group hugs and noisy public grieving have become commonplace and, indeed, expected. Politicians who refuse to conform are depicted as uncaring or cold-hearted.

The epitome of British self-restraint and understatement is perfectly illustrated by this famous exchange, 102 years ago, during the showdown Battle of Waterloo involving the British and French armies in 1815.

The head of the British cavalry, Henry Paget, Earl of Uxbridge, having demonstrated outstanding bravery, remarked to his commander, the Duke of Wellington: “By God, Sir, I’ve lost my leg.” To which Wellington replied “By God, Sir, so you have.” Paget later underwent amputation, without anaesthetic and, according to a doctor present, “neither uttered groan or complaint nor gave any sign of impatience or uneasiness”. What a man.

Paget survived, was fitted with a wooden leg, walked with the aid of two sticks, and lived to be 85. He became the 1st Marquess of Anglesey after Waterloo and, a few years after the battle, in 1828, he was appointed Lord Lieutenant of Ireland (also known as the viceroy, the British monarch’s representative in Ireland) – a post that he held for only a year although he was re-appointed to serve from 1830-33.

When travelling to Ireland to take up his post, he reputedly stopped in Anglesey in Wales and bought a sword cane – essentially a sword disguised as a walking stick. The sword fits into the cane but can be quickly unsheathed by unscrewing the handle of the cane if a moment of danger arises. They were popular among gentlemen who feared being attacked and robbed in the streets.

The cane’s malacca wood grip is topped with a gold finial engraved with the crest of the 1st Marquess of Anglesey surrounded by The Garter and surmounted by a marquess’s coronet.

This very cane would once have been used by Paget – perhaps during a stroll through the grounds of the Vice-Regal Lodge in the Phoenix Park (now Áras an Uachtaráin) or during his visits into the city centre to his office at Dublin Castle. It sold for £8,060 (€9,200) to an unnamed private buyer.

‘At night I would go to my room to quietly drink.’ Irish women and addiction
6