"The Irish love affair with grey is still going strong, no matter what anyone says" 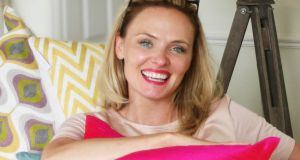 Rachel McCann: “My memory is generally awful but I never forget a fragrance or who wore it.”

Product designer, homewares buyer, entrepreneur and perfumer – just a few of the hats Dubliner Rachel McCann wears. In the last year alone, she has launched her own homewares brand, Uneek and her own fragrance brand, Eau Lovely.

McCann, who just turned 40, entered the world of interiors first as a teenager designing wall art, which she sold to local galleries and at outdoor markets and eventually market under the the brand The Green Wall Gallery that expanded to include home accessories. “I put in the hard slog at trade fairs and set up stands at every interiors gig going, selling paintings, cushions, mirrors and lamps I was designing at the time.” Her graft paid off, and by the mid-2000s, The Green Wall Gallery collection was stocked everywhere from John Lewis to Fenwick and Habitat.

McCann continued to create wall art wall art using mediums such as glass, jewels, twisted wire and Indian ink and exhibited in New York, Paris, and London as well as in China. While on the gallery circuit, McCann inadvertently became an agent for lots of budding young photographers: “I’d meet artist with so much talent, but no sales ability.” Her solution was to piggyback their photography on to her homewares brand and take the lot with her to Philadelphia to sell on the US TV shopping channel QVC. “It was an experience that I will never forget, standing in a bright studio, doing live TV with a hyper host for hours on end. It’s an incredible market.” she says.

By 2011 with the downturn in the economy, McCann was feeling the pressure of running her own business. “We were knee deep in the recession at that point, and no one was getting paid.” So, when Harvey Norman came knocking at her door looking for a new head of visuals she put her brand on ice and went on someone’s else payroll for the first time since leaving school.

“At the time people saw Harvey Norman as being a bargain store and electrical outlet, but they sold some decent homewares – you just couldn’t see it through all the clutter. I looked at the whole project and thought first revamp, refresh, redesign and feminise the stores and then rethink the stock. We remerchandised the floors and styled up photo shoots, so they looked like magazine editorials. We grouped collections into themes – Scandi, glamour, sleek, etc. and it worked. I remember a headline in a broadsheet asking ‘when did Harvey Norman get so cool?’ And I knew I was on the right track.”

McCann says she pushed the limits as far as is commercially possible in buying more trend-driven stock for the store and, “for the most part the Irish customer came on the journey with me, they took risks, adding pops of colour and brave patterns that would not have sold before. But I remember one season, a few years back, and teal was the hot new interiors shade. I love greens so I bought loads of it and no one in Ireland would touch it. In hindsight, it was probably too cold a shade for the Irish taste – we tend to prefer warmer colours – except for grey of course. “That love affair is still going strong, no matter what anyone says about grey being over,” says McCann.

After buying intensively for five years, it was time for McCann to move on. “I was so busy doing all the paperwork and admin that the creative side was almost becoming a chore, and that’s when I knew it was time .”

She took time out at the end of 2015 to figure out her next step and kept coming back to her love of fragrance. “My memory is generally awful but I never forget a fragrance or who wore it, it’s a weird and wonderful gift. Rive Gauche takes me back to my Montessori teacher, Fahrenheit for Men summed up my teens and CK One transports me to my Leaving Cert English exam.” So there was only one thing to do. McCann packed up and went to Grasse in the south of France to study fragrance and try to create her own perfumes.

She spent months studying and travelled back and forth many times tweaking and recreating scents she loved. In August, last year Eau Lovely was born, a home scenting range that she sees as the first step. “Eventually I will launch the perfumes when the time is right, but first the scents have been adapted to make candles, soaps, room sprays, and diffusers. I want to fill homes with premium perfume, particularly with candles. I have used a mix of soy (for a clean burn) and paraffin (it throws the scent the furthest) and am beyond proud of the collection.”

McCann also felt compelled to set up another homewares brand and using her little black book of suppliers, manufacturers, and craftspeople she designed a range called Uneek. Think arty cushions, textured throws, talking-point lighting, ornate mirrors, graphic rugs and furniture covered in bold fabrics. “It’s fun, fun and then just a little bit more fun thrown in and we’ve kept it as affordable as possible, as I hate getting ripped off as much as the next person,” says McCann of the range which is now in more than 15 department and interior stores in Ireland and the UK and is due to launch in Germany, Dubai, and the US this winter.

So, what’s next for McCann, who also lets it drop she’s gutting her Dundrum house and adding on a two-story extension this summer? “A holiday would be nice! To say the last year has been a rollercoaster ride is putting it mildly. I do feel a bit overwhelmed, but I am very much living in the now and doing what I love when you believe in what you do things seem to just fall into place, so the answer is God only knows what’s next but bring it on.”