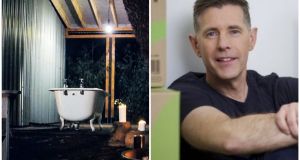 Bannon and the bath: Architect Dermot Bannon has retrospectively applied for planning retention for storage sheds in his garden

Celebrity architect Dermot Bannon has come a cropper with Dublin City Council over his own high profile extension, which was the subject of a recent RTÉ series.

The target of the council’s ire is the rear garden structure under which Bannon famously shared an outdoor bath with celebrity gardener Diarmuid Gavin. While a bumper Sunday night viewing audience watched the two chat in the (unfilled) bath under a moonlit sky, eagle-eyed council staff were drawn instead to the structure that Bannon fashioned at the end of his Drumcondra garden.

Following investigations and a warning from Dublin City Council, Bannon retrospectively applied in recent weeks for planning retention for his two storage sheds joined by a covered external space at the rear of the garden.

A spokeswoman for Dublin City Council told The Irish Times: “There is an enforcement file open on this, a warning letter did issue, and as investigations are ongoing we cannot comment any further.”

The Valentia Road extension project was carefully documented in the RTÉ mini series and raised many eyebrows – not least Bannon’s – when the budget ran to €600,000. Typical of the Room to Improve series, the project ran into a number of pitfalls along the way, but the rear garden structure only featured briefly when a clawfoot bathtub salvaged from the original 1930s house was installed under a corrugated iron (or “crinkly tin” as Bannon and Gavin called it) canopy between two small sheds.

The sheds – at 17sq m (183sq ft) apiece – are small enough to be exempted from planning restrictions, but it appears the council has an issue with the added external corrugated covering of 20sq m joining the two sheds and creating a single structure that exceeds the allowed 25sq m. Bannon is now retrospectively applying for the original planning to be retained and could make the case that the garden structure is not a full building because part of it is exposed. Dermot Bannon was unavailable for comment.

So far no further objections have been filed to Bannon’s application for planning retention and a decision from the planners will be due by the end of March.

Bannon bought the 1930s property in 2018 for €895,000 and initially sought a substantial extension which had to be reduced before gaining final planning approval. The two part Dermot Bannon’s Room to Improve mini series aired in early January to massive audiences, with the second episode attracting 46.7 per cent of the available viewers.

Coronavirus anxiety keeping you awake? Here's how to get more sleep
8