New homes to suit on every step of the property ladder 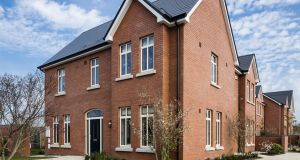 1 Something new in Dublin 22

Kilcarbery is a new development of 1,034 homes in Clondalkin, Dublin 22, designed by award-winning architects BKD, and built on 29 acres of local authority land.

Comprising three- and four-bedroom houses, one- and two-bedroom apartments and three-bedroom duplexes, the majority of the houses will be priced at under €320,000, says DNG new homes director, Gina Kennedy. Included in the plans by developer Adwood Ltd, a consortium of established Dublin builders Adroit and Maplewood Residential, are playing fields and a community building that will be handed over to South Dublin County Council, a creche and retail units. The development is located directly off the new R136 link road which is the main arterial route to the Naas Road, and links directly to the M50 and Dublin city centre. Bus routes 51d, 51x and 68 are on its doorstep.

First-time buyers looking to minimise the hassle in getting to and from work will be interested in two new schemes located next to two stops on the Luas red line.

The homes at City West Village feature reconstituted granite sills, traditional bullnose brick arches and granite paving and larger than standard Edwardian-style windows. This phase of three-bedroom terraced houses will cost from €350,000 while three-bedroom semis will start from €382,500, through agents Sherry FitzGerald. City West Village is across the tracks from the City West campus red line Luas stop where a journey time to Abbey Street in Dublin city centre is about 50 minutes.

3 All aboard for Adamstown

Newpark, St Helens at west Dublin’s Adamstown, is a well-located development where the new properties feature Kube designer kitchens, separate living rooms and an eat-in kitchen. Prices for these decent-sized properties start from €315,000 for a 95sq m (1,025sq ft) mid-terrace three-bed while an end-of-terrace house, 111sq m (1,200 sq ft), with the same number of bedrooms, is asking from €345,000 through agents Savills. The DRes Properties scheme is just a seven-minute walk from the Adamstown train station, which is on the the Phoenix Park tunnel service, travelling from Hazelhatch to Grand Canal Dock in Dublin city centre.

For those trading up

1 Plenty of choice in Dublin 18

Dublin 18 is home to several new developments of fine-sized family homes. DNG has already sold half of the 20 homes at Carraig Bui, a boutique development on Johnstown Road in Cabinteely, to families trading up, on a “subject to sale” basis, says its new homes director, Gina Kennedy. It gives buyers about eight to 10 weeks to get their own home on to the market and sale agreed. Set over three levels and 2½ storeys, there are eight four-beds with 168sq m (1,814sq ft) with prices from €695,000. The estate includes two five-bedroom units, each with a large living room and 170sq m (1,830sq ft), with side entrances. Prices start from €745,000.

Beechpark in Cabinteely is a development by the O’Flynn Group, where three-bedroom terraced houses of 131sq m ( 1,410sq ft) will be selling for in excess of €520,000, says Sherry FitzGerald’s new homes director Colm Byrne. Situated on the old Bray Road, the estate will comprise 83 houses and 140 apartments.

Close to the Park Carrickmines retail park, Knight Frank is selling phase two of the Fairways, Carrickmines Manor, with three-bedroom houses measuring from 117sq m (1,259sq ft) and four-bedroom houses from 157sq m (1,690sq ft) launching later this season with prices yet to be confirmed. At nearby Clay Farm, next to the Leopardstown Wood stop on the Luas green line and just a 25-minute commute from Dublin city centre, sizeable two-bedroom apartments of over 92sq m (1,000sq ft) cost from €395,000. A two-bedroom penthouse meanwhile will set you back €450,000 through agents Savills.

North of the river Liffey and across Dublin Bay is Drumnigh Manor, in the coastal community of Portmarnock. This Shannon Homes scheme is located just a 10-minute walk from the village’s Dart station, where the commuter service will have you at Connolly Station in a single-stop journey service of 20-24 minutes. The development is also close to several local schools and numerous amenities. The A2-rated, three-bedroom homes, which are set over three levels, start from €515,000 through agents Hooke & MacDonald.

3 Break free from the city

If you love designer luxe and want to escape Dublin’s city limits, then head south to the idyllic county Wicklow town of Enniskerry where Sika Woods is a new estate by veteran developer Francis Rhatigan’s Winterbrook Homes. Located at Parknasilogue on the outskirts of the village, the scheme backs on to the golf club at the landmark Powerscourt estate. Designed by award-winning architects Aughey O’Flaherty, the boutique scheme will offer three-bedroom homes of 125sq m (1,345sq ft) and four-bedroom units of 168sq m (1,808sq ft) through agents Sherry FitzGerald. Prices have yet to be confirmed.

Castle Court in Sandymount is a small scheme of just 25 units being sold through agents DNG. It includes seven own-door, two-bedroom, ground floor apartments of about 94sq m (1,011sq ft) each with a south-facing patio. Prices are still being finalised but new homes director Gina Kennedy says they will start from the late €700,000s. For inter-generational families looking to buy it is worth noting that above these apartments will sit four-bedroom duplexes of 125sq ft (1,356sq ft). The scheme will also include some three-bedroom terraced houses.

Secreted off the N11, immediately beside RTE’s Montrose studio campus is Cairn Homes’ Donnybrook Gardens. It will comprise two-bedroom, two-bedroom with study, and three-bedroom apartments in an imposing design. Situated off the end of Greenfield Road, this scheme offers a home in a lesser-known, but highly-regarded and sought-after enclave in Donnybrook, Dublin 4. Hooke & MacDonald is the selling agent and Des Donnelly expects prices for the two-bedroom units, which extend to 102sq m (1,100sq ft), to start from about €765,000.

Egremont on Church Road in Killiney, in south county Dublin, is a new scheme of houses and apartments that chimes with the times. Fresh from the planning stage it will be built to passive house standards with the developer, Durkan Residential, upcycling materials from the site. Granite rock quarried from the plot will be used for its footpaths while trees felled in the course of the development will be turned into playground equipment. The properties will have sedum roofs, triple-glazed windows and be externally insulated. Hot water on demand and a filtered water system will feature, while average heating bills will be kept as low as €1,100 per annum. Comprising two-bedroom apartments, three-bedroom duplexes, and large three-bedroom houses, the scheme will be offered to the market in late September or early October. Prices have yet to be confirmed.

The disappearance of Trevor Deely, part 1
5

Coronavirus: Irish scientist’s team leaps ahead in race to find a vaccine
8

The disappearance of Trevor Deely, part 2: the search
10