Picasso house built on a Guinness fortune for €23m

The artist bought Mas de Notre Dame de Vie, a luxurious villa near Cannes in the South of France, from the Guinness family, and lived and worked there until his death in 1973 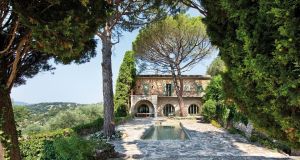 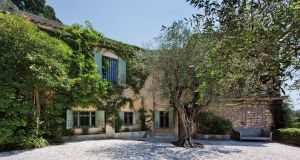 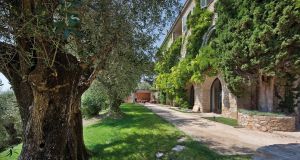 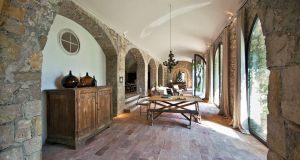 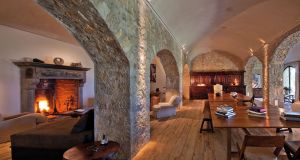 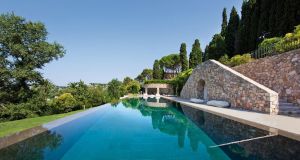 Thought of as being “Picasso’s house”, a spectacular property in the south of France which goes up for auction next month has a strong Irish connection.

Benjamin Seymour Guinness first spotted the spectacular Mas de Notre Dame de Vie property in the 1925. Situated in Mougins – a 15-minute car ride inland of Cannes on the French Riviera – the property was then a “mas” (a traditional farmhouse) but Guinness, a banker and philanthropist descended from the banking arm of the Guinness family, and his artist wife Bridget converted it into a luxurious villa.

The warm-all-year-round climate and the gorgeous light of the surrounding area soon made Mougins a desirable destination for artists both amateur and professional. Of the former, Winston Churchill – a good friend of Benjamin and Bridget – became a regular visitor to their Mougins home, spending many a summer’s day and night sitting in their garden painting.

An artist of a different category altogether, Pablo Picasso, was also a friend of the Guinnesses and, like Churchill, became a regular visitor to their home. So taken was Picasso by Mas de Notre Dame de Vie that he eventually bought the house from Benjamin and Bridget’s son Loel. Picasso lived and worked in the house until his death in 1973. The property is now going to an eagerly awaited auction on October 12th with a starting price of €23 million.

Hans Veenhuijsen from the R365 international real estate company is the property’s agent. He says the house’s original connection with the Guinness family is not well known at all. “I couldn’t find much information [about the Guinness connection] but it would be nice to show the family the property again” he says.

Veenhuijsen says “the interest has been huge” in the upcoming sale of Mas de Notre Dame de Vie. “The interest is coming from the US – California and the New York area mainly – also from Russia, Taiwan, China and Monaco. The people interested are known as very wealthy.”

The seclusion and the sumptuous surrounds of the property allowed Picasso to produce some of his best art. He extended the ex-Guinness property gradually over the years, transforming it into – as he said himself – “the home of my dreams”.

But after the death of Picasso’s wife, Jacqueline Roque, in 1986, Mas de Notre Dame de Vie stood empty for 30 years. Since Picasso’s death, she had left everything as it was in the house – even his reading glasses were in the same place.

A wealthy financier bought the house a few years ago and had the renowned interior designer Axel Vervoordt bring the house back to life while equipping it with modern amenities. Using source material from the many Picasso biographies, over 100 people worked for over two years restoring it to its full grandeur.

There was plenty to play with: 2,400sq m of floor space, 1,500sq m of which is the main house. The eight acres of landscaped gardens – now with an infinity pool, a clay tennis court, a gym, spa and hammam – have 500-year-old olive groves, water features, an orangerie and innumerable terraces. A guesthouse and a caretaker’s house make up the property.

There are two viewing days of the property: September 22nd and 29th. “For the viewing, we invite the people that have given us some financial background information or people that we know are wealthy enough to do a transaction like this” says Veenhuijsen. “We expect around 20 people on the first viewing day. Due to the fact that it is a foreclosure we have to show the property in groups which is not a very attractive way of showing. However, it’s just a fact when buying a foreclosure – the circumstances are not always as you would wish.”

A big part of the appeal of this sale is also how the small town of Mougins has become a destination in itself since Picasso’s death. When Benjamin and Brigid Guinness first invited Picasso to see the house in the 1930s, Mougins was very much off the French Riviera map.

Now, though, it’s a gastronomic destination and has become a popular resting place for the acting elite attending the annual Cannes film festival. The Mougins Museum pays homage to the all artists who have been seduced by the area.

The Notre Dame de Vie chapel just beside the property was first erected in the 12th century and is now a listed historic building. The Mougins tourism website (mougins-tourisme.fr) boasts that “the whole world has come to visit” the chapel, with Charlie Chaplin and Jean Cocteau two of its many admirers.

As the rumour mill goes into overdrive over who will be bidding for Mas de Notre Dame de Vie next month, Mougins is clearly benefiting from the publicity surrounding the sale. This tiny place has attracted art, design and music figures including Man Ray, Jean Cocteau, Yves Klein, César Baldaccini, Yves Saint Laurent, Christian Dior, Édith Piaf and Jacques Brel over the years.

Catherine Deneuve is also a regular visitor and Elizabeth Taylor used to host her annual AIDS gala in Mougins during the Cannes film festival.

Perhaps no other small town boasts such a cultural guestbook as Mougins. And all because Benjamin and Bridget Guinness – on a car ride out of Cannes in the 1920s – fell in love with a dilapidated farmhouse that in turn seduced Pablo Picasso.