Ambitious history project in Phibsborough for €850,000 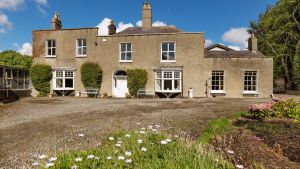 It’s little wonder there have been moves to make Cherrymount House a protected structure: built in the 1830s, it is one of the earliest houses in the northside suburb of Phibsborough. It may have stayed off the list for so long because it is truly tucked away. Set behind tall hedging, its entrance which once was on the North Circular Road is now a long hedge-lined driveway off Cherrymount Park, a cul-de-sac of houses built in its grounds in the 1950s.

When it was last for sale in 1965 it was advertised in The Irish Times as “Delightful old-world non-basement residence detached in its own well-kept grounds adjoining North Circular Road convenient to city. 4 reception, 6 bedrooms, garage and outoffices, etc.”

The buyer then was a woman who had worked abroad for much of her life but retained a keen eye for property and its potential. Living on the ground floor, she converted the upstairs bedrooms into five bedsits – the payphone is still on the landing – and built a single-storey extension to the rear with two self-contained units and then in later years added an ugly two-storey self-contained rental on the other side.

None of this is obvious from the handsome-looking front which features two unusual oriel windows on either side of the fanlight-topped front door – and the house immediately feels quite separate from the busy road and suburban setting around it.

The bedsit tenants left decades ago and the upstairs has been unlived in since then and significant roof problems are obvious in the collapsing ceilings and general air of disrepair in several of the rooms. That is not going to deter anyone seriously interested in this house because it is obvious in every corner that they will have to restore and renovate throughout to turn this into what it certainly can be after significant investment – a comfortable family home.

Along the way they may be able to solve one of the mysteries of the house – the location of the staircase in the 1830s. The house was extended in the 1800s and a new staircase was added possibly replacing a spiral staircase in a charming turret to the rear. The size – 314sq m, 3,370sq ft – isn’t going to matter much either as the most recent additions will be knocked by new owners.

Cherrymount House was built as a city rental by Viscount Monck of Charleville and it would originally have had extensive grounds. It now sits on 0.4 acre so it still has good private gardens on three sides.

Sherry FitzGerald has priced this unusual property at €850,000.