More light, an extra bedroom and a bigger back garden were the goals of the renovation 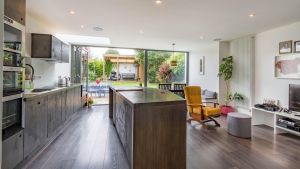 A young architect and her husband decided on a major makeover of this semi-detached suburban house that they bought at the bottom of the market in 2011.

They wanted more light through the north-facing house and the revamp involved putting a glazed wall between the livingroom and the hall, as well as extending  the house, with a floor-to-ceiling window and bi-folding glass doors stretching across the rear of the house, opening into a garden that is effectively an outdoor room.

Now Aoife Kelly and her husband Eoin are selling their 117.5sq m (1,265sq ft) three-bed end-of-terrace house, 10 Obelisk Grove, Blackrock, Co Dublin, for €575,000 through DNG. With a four-month-old baby, Blaise, they would like a fourth bedroom, a bigger back garden – and a new project, says Aoife.

They revamped the open-plan kitchen/diningroom/living space completely. The extension has an atrium-style skylight to bring more light into the kitchen; there’s built-in seating in the dining space next to the floor-to-ceiling window. The couple decided on white walls and dark kitchen units the same colour as the Balterio laminate floor. Their builder, Conor Redmond, hand-built the units and the island using plywood, stained deep brown and sealed – it’s very hard-wearing, says Aoife. There’s a small utility room off the kitchen, with a door into a side passage.

The garden has a sandstone patio, black bricks beside the raised lawn and a good-sized gazebo at the end where the couple can barbecue even if it’s raining, says Aoife.

Double glazed doors open from one side of the kitchen into the livingroom at the front of the house: it’s relatively small, but the glass wall that separates it from the hall makes it seem bigger. Aoife discovered that all the downstairs walls were load bearing, “so there’s lots of steel around it”.

Upstairs there are two double bedrooms, the main one en suite,  and a single bedroom decorated as a nursery, as well as the family bathroom.

There is off-street parking at the front of the house, which is tucked away roughly halfway down the cul-de-sac that is Obelisk Grove in the St Augustine’s Park development behind St Augustine’s school in Blackrock.