Evocative five-bed Jamestown House sits in the middle of 1.2 acres of gardens

The house from the iconic ESB advert is now on sale. Located in Kilternan, Dublin 18, the home was built in 1906. Video: ESB 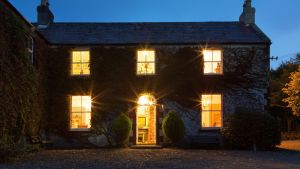 In the final scenes of the ESB’s classic 1980s Going Home ad, the car bringing  a young emigrant home draws up outside an ivy clad farmhouse glowing with light. He jumps out of the car as mammy rushes to the door to greet him in a scene that still tugs at the heartstrings, decades after the ad was made.

The house in the ad is Laurence Roe’s family home in Kilternan, Dublin 18, built in 1906 for his grandmother when she got married.

At the time, the farmhouse stood on about 100 acres in an area where the Roe family has been settled since the 1600s. The director of the ad had spotted the house driving past it on the Enniskerry Road and asked Laurence’s late mother Fay if he could use it in the ad.

Ironically, Laurence himself never had a homecoming like the one pictured -- he has lived in the family home all his life.

Now he’s selling Jamestown House, a 312.5sq m (3,364sq ft) five-bed sitting in the middle of 1.2 acres of gardens through Sherry FitzGerald for €1.545million. His sister-in-law lives next door.

Jamestown House has been extended and added onto over the years, and includes a two-storey annex to the left of the front door which is linked to the main house; it looks from the outside very much as if it was always part of the original house.

Inside, it’s a comfortable family home with a quirky layout, open fireplaces in nearly every room and richly decorated with an eclectic range of furnishings, carpeting, and bric-a-brac. There are works of art everywhere, most of which come with a story, says Laurence. Minimalist, it’s not.

Structurally, it was refurbished in the 1990s, rewired, replumbed and a new damp-proof course and new flooring put into the original house, along with central heating. Three years ago, a new roof went over the back section and the roof at the front was refelted and rebattened.

The front door of the house opens into the hall that’s glimpsed in the TV ad, widening into a bigger hall between the kitchen and a conservatory at the back of the house. The kitchen was added on to the house in the 1960s and has a tiled floor and mahogany units: it was the only room in the house not used in the ad – kitchen scenes were filmed in a studio. A utility room and small office open off the kitchen.

There are four reception rooms downstairs, including the two in the annex: the drawingroom and diningroom both have marble fireplaces, and are vividly decorated – the drawingroom with pink walls, the diningroom with patterned wallpaper. A livingroom in the annex with a handsome oak fireplace opens into the conservatory, as does the diningroom. Another annex reception room opens through French doors into the front garden.

A smaller bedroom at the rear has been turned into a small sittingroom with a large picture window with uninterrupted views of the Dublin/Wicklow mountains.

Jamestown House sits in the middle of a very large garden, mainly in lawn, filled with shrubs, hedges and mature trees, including a Japanese maple and a Canadian redwood. It backs onto Stepaside Golf Centre, developed by Laurence’s brother when he stopped farming 20 years ago. There are several outbuildings including a very large garage.

Jamestown House is located on the busy Enniskerry Road, between Stepaside village and the Golden Ball pub.