Arty magnetic wallpaper and a mattress to yak about 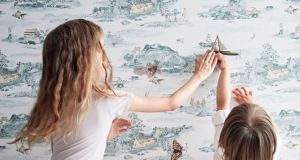 Everyone knows about fridge magnets, but interactive magnetic wallpaper? The London-based Sian Zeng homeware company founded by a Central Saint Martins graduate has become known for its imaginative wallpapers and innovative, interactive ranges. Its latest collection, “Mountains”, features patterns that connect Chinese paintings and European illustration styles to create a landscape of misty mountains and traditional Chinese houses in tones of grey and pink or dusky blue and peach. It is backed with a magnetic liner on which stories can be acted out by children with a cast of character magnets. The wallpaper comes in conventional paper as well (£69/€75.50 for a 10m roll which is 52cm wide). sianzeng.com

There’s nothing like a good cup of tea. But what makes a good cup of tea? A good kettle that’s what, and if you’re really serious about tea-drinking you’ll know that you really need to be able to control the temperature of the water, depending on whether you’re having a cup of green tea (70 degrees), oolong (85 degrees) or chamomile (90 degrees). Smeg’s new KLF04 kettle encourages this sort of precision teamaking and it also has a “keep warm” option which maintains the selected temperature for up to 20 minutes – just in case the teamaker has wandered off to check emails.

Like its companions in the Italian company’s range of retro kitchen gadgets, it looks as though it has survived from the 1950s but behaves like something beamed up from the future. Available in cream, black, red, chrome and pastel blue/pink/green from the end of September, €160. smeg.ie

Get fleeced at the Savoy

It is possible to sleep on the noble yarns of sustainable hand-combed down from Mongolian yaks. I kid you not. Not just any yaks but ones from the Khangai region of Mongolia. Combed only once a year, the yaks produce 100g of down, which is reputed to be as soft as cashmere and warmer than merino wool. It takes 40 yaks to supply enough to make a mattress topper for the ultimate bed made by bed company Savoir.

Designed by Tengri, the sustainable fashion house, the mattress toppers are warmer than merino wool and are naturally thermo-regulating. The yaks live in conditions from minus-40 to plus-40 degrees in the wild. The complete Savoir No 1 Khangai super-king bed with yak fleece can be bought for £70,525 (€76,922), the yak down-filled mattress topper is £13,250 (€14,450).

If you’d like to try before you buy, the Savoir mattress with a Khangai yak mattress topper, can be found in the four-poster bed of the Royal Suite at the Savoy Hotel in London. The suite runs the length of the fifth floor, with riverside views. The £14,000 (€15,208) nightly rate includes a butler, chef, hair stylist, make-up artist, therapist, personal shopper and use of a chauffeur-driven Rolls Royce.

Róisín Ingle: I’m menstruating as I write this. And I’m mad as all bloody hell
4

Does sitting down fool our bodies into thinking they weigh less?
Real news has value SUBSCRIBE