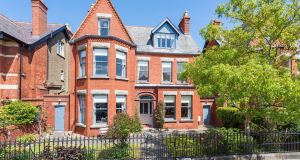 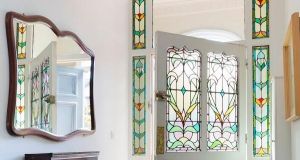 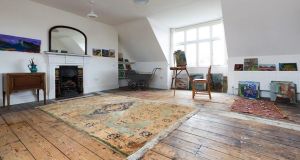 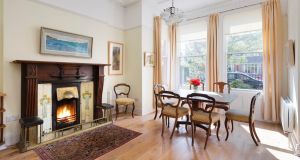 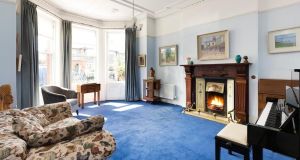 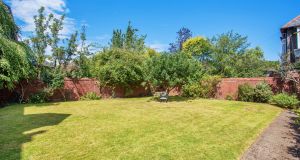 Cowper Gardens is one of those roads which people simply never want to leave. Number 2, home of artist Ita Quilligan, who died earlier this year, is only the third house on the road to be on the market since 1993 – which says a lot about these “forever” family homes.

They’re incredibly convenient too – with the Luas just at the end of the road. Quilligan, whose first art teacher, back in the 1920s, was Lolly Yeats (“just as much a genius as her brother [WB],” according to Ita), painted shimmering and atmospheric scenes which were shown in the RHA and Taylor Galleries in Dublin and in Edinburgh.

Perhaps one of the reasons she didn’t enjoy the greater prominence she deserved, was because she also had 11 children, and two: Zelda and Paul show me around the six-bed Edwardian detached house, telling wonderful stories of music and art as we go.

Zelda describes how ahead of her time her mother was, knocking through from kitchen to parlour, to create one big light-filled space

Paul is an architect, and he expertly points out the moulded ceilings, the staircase designed to bring maximum light into the house through cleverly placed stained glass windows, and the wonderful fireplaces throughout. In the little study room on the ground floor where Ita did her wood-carving, the fireplace still has its original pot-warmer.

Meanwhile, Zelda describes how ahead of her time her mother was, knocking through from kitchen to parlour, to create one big light-filled space. There’s also a clever little drop-down bench, and some really fabulous old Belfast sinks. The kitchen and scullery open to a private sunny garden, complete with roses and apple trees. New owners will undoubtedly upgrade the kitchen, though they may want to incorporate the Aga into their plans. The bedrooms may be re-jigged too to add en suites, but all the ingredients are already here for a really special spot.

There’s a charming sitting room, with a bay window on the ground floor, while upstairs, the master bedroom above it also has a bay. The entire house is filled with lovely light and has a warm, welcoming atmosphere. “This was my bedroom,” says Zelda, showing me a sweet single.

Up again and there are two more bedrooms on the top floor. The largest of these was first a playroom, and then Ita’s studio for many years. She also taught art classes to local children here for a decade. Photographs show the results, and make me think that, like Lolly Yeats, she was a pretty excellent teacher too.

At 246sq m (2,648sq ft), the house is for sale with Sherry FitzGerald for €1.95 million, and even if you’re not in the market for such an ideal spot, head along between 2pm and 4pm on Sunday, September 24th, when an exhibition of Ita’s paintings will be on in the house – and for sale too.