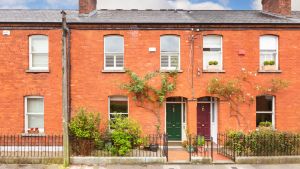 On the day we speak about her Rathmines home, children’s author Síne Quinn is preparing for the launch party – virtual, of course – for her new book with illustrator Margaret Anne Suggs called Holy Shocking Saints. With nothing left to do now that the project is finished and, more importantly, her house is fully renovated and extended she says she, her husband Martin and their twins are ready to take on another fixer-upper.

They have lived at 11 Summerville Park for the past 12 years and did some work before moving in to make the terraced red-brick comfortable. Then, when funds allowed, they undertook a major renovation six years ago to extend the house to the rear for a spacious kitchen/dining room and to convert the attic into a guest bedroom and home office with adjoining shower room.

They commissioned architect Ronan Rose-Roberts for the renovation and extension which brought the house to 116sq m (1,248sq ft), excluding the attic room. The children were aged 10 by then so the rear reception room was no longer needed as a playroom. Instead, the new configuration involved extending the rear of the house directly into the back room creating a more grown-up family space while the custom-glazed doors facing on to the small patio garden throw light into the entire area. The back of the house is south facing.

The living room with its original fireplace and floorboards is to the front of the house and its high ceilings have allowed for plenty of bookshelves. The original sash windows have been replaced with double-glazed timber versions. The terrace was built around 1900.

There are three bedrooms – two to the front, the largest to the rear – as well as the family bathroom in the first return which originally would have been a bedroom and it still has its cast iron fireplace, an attractive feature.

There is a small railinged front garden and on-street parking. The quiet cul-de-sac is off Upper Rathmines Road on the side Summerville Park that backs on to Kildare Place national school. Number 11 is for sale through Knight Frank asking €825,000.