Dr Eva's own operation transformation for €975,000

As the TV doctor moves to Portugal, her five-bed dormer near Kilquade goes on the market 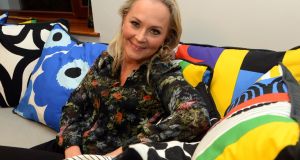 Famous for her forthright manner on RTÉ’s Operation Transformation, Dr Eva Orsmond clearly isn’t one for compromise. “I’m a perfectionist and a bit of a control freak,” she says. This may be difficult to handle if you’re on the receiving end of her dietary mentoring, but it’s all to the good if you’re in the market for her near-perfect home.

Since leaving Operation Transformation in 2015, Orsmond has worked on and presented health-related documentaries for RTÉ, and featured on Dancing with the Stars and The Restaurant. Yet alongside all that she has also found the time to renovate and extend her family home in Kilquade, Co Wicklow.

She bought the house in 2007 with her then-husband Wyatt (the couple announced their split in September of last year). “We have been working on it since,” she says.

Eva is Finnish, and some excellent elements and innovations from that country have been incorporated in the house, but more on those later.

“We paid €960,000 for it,” she adds ruefully, thinking of the timing: 2007 was, after all, just before the property crash. “We had to take all the carpets up but all we could afford to do was paint the place. We lived downstairs.”

Over time, they completely renovated the existing house which sits on a three-quarter acre site surrounded by fields and overlooking mountains. It may be in the countryside but it’s just off the N11, and a short 40 minute drive to Dublin city centre. Kilquade and Greystones are down the road.

The renovated property includes a huge bright and airy entrance hall, large reception room, three bedrooms downstairs, and two more upstairs. The work also extended to a new kitchen (“that took over a year, we lived for many months without a kitchen”), family room, and a rather brilliant 11m indoor heated swimming pool with sauna alongside. The entire area is approximately 420sq m (4,500sq ft), and the house is now for sale with Sherry FitzGerald for €975,000.

Speaking on the phone from Portugal, Eva says she has moved there to begin a new chapter (though she will retain her clinics in Ireland). Her three dogs are already settled in out there, and she’s travelling backwards and forwards, setting things up with the new house, and organising the sale of this one, while concluding her latest documentary, Ireland: Health Divide, due to be broadcast on RTÉ One on September 4th.

“The sauna was imported from Finland. There are over two million saunas in Finland, and only five million people. It’s a major relaxation. This was to be our retirement house... but that didn’t work out,” she says, before gathering her otherwise omnipresent enthusiasm and continuing: “Swimming is the best exercise as you get older, it exercises all the muscle groups and isn’t hard on your joints.”

The sauna itself is by Sun Sauna, and the kiuas – the wood-burning fireplace – is by IKI Kiuas. “There are lots of Finnish people living in Ireland, and Irish people might want saunas too. It’s a family thing in Finland. I don’t know if Irish families would take a sauna together.”

They might want to take a leaf out of Eva’s book and begin. Apart from the obvious niceness of having your own indoor pool and sauna, and the undeniable health benefits, the nicest thing about this pool is how well it integrates with the rest of the house. Large glass doors open onto it from the den, which itself leads off the kitchen.

“I love to cook,” she says. “And I wanted a kitchen where you’re not alone.”

There’s a five-burner gas hob, and lots of storage space. There’s also a useful pantry, while French doors lead to a covered patio area, with a built in chiminea. “We use it a lot. One Christmas we even ate outside and did a barbeque there.”

Beyond the patio there’s a nice grassy area, and mountain views behind. A clever outside touch is the covered car port area with side access to the house. “I don’t know why more Irish houses don’t have them,” Eva wonders. “Especially with the weather. You can come home and unpack all your bags and shopping and not get wet.”

It’s the type of immensely practical thinking you’d expect from her, and there are more touches designed to bend the house to living an active lifestyle, even if you happen to be a perfectionist.

“People wonder how I can have three dogs when I like things to be so clean. I am actually OTT when it comes to that.” she laughs. “But that’s why we have all the floor tiles.”

There’s also a separate place for wetsuits, and storage everywhere, including a huge wardrobe for Eva, that runs the length of the eaves upstairs.

“There’s so much storage that the decluttering has been really difficult. That’s the painful part. And it’s sad to leave the house now that it’s so perfect, but it has been a very happy family home. I really hope the people who get it will be very happy too.”

Róisín Ingle: How Taylor Swift helped me navigate the puzzle of parenthood
4