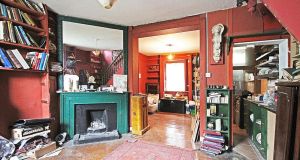 Located off Meath Street in Dublin’s Liberties is a property that would sit happily in a Victorian film set. The end of terrace redbrick – 3 Chaworth Terrace, Hanbury Lane, Dublin 8, for sale at €225,000 – was home to the late architect Jeremy Williams and it is everything a market-ready house shouldn’t be, ie cluttered with books and drawings and painted throughout in bold colours. But for all that it stands to recall the character who lived there.

A twin son of Dermot Williams, a member of the Tullamore merchant family that distilled Tullamore Dew and Irish Mist, Williams’s clients included developer Johnny Ronan, for whom Jeremy designed a Venetian-style palazzo on Burlington Road. (Nicknamed “the pink palace” that house is currently available to rent on AirBnB for €850 per night.) His other work for Ronan included restoring Dargle Cottage, the one-time home of Basil and Valerie Goulding, on the Goulding Estate, outside Enniskerry.

Williams also designed The Old Fort, a striking Regency-style property on the outskirts of Ramelton in Co Donegal built on lands that sweep down to the shores of Lough Swilly.

In 1994 Williams wrote Architecture in Ireland 1837-1921, the first comprehensive history of a subject close to his heart; in 1974 he had established the Irish Victorian Society.

Also a deft draughtsman, his drawings featured in several books including The Irish Châteaux: In Search of Descendants of the Wild Geese by Renagh Holohan, and the 2006 A Year in an Irish Garden, written by Rubel Ross.

It is fitting that Williams lived in a Victorian-era redbrick and it’s probably no accident that its Dickensian-inspired décor chimes so well with the period.

If viewers can see past the clutter and the refurbishment required, this two-bedroom redbrick could, with time and modernisation works, become a lovely city pad. In some ways, though, it would be a shame to erase its personality.

The house, which measures 67.8sqm/ 730 sqft, is for sale through agents Felicity Fox for €225,000. The property, which forms part of a terrace on Hanbury Lane, just off Meath Street, has two interconnecting reception rooms.

The front room has a corner open fire with a broad fireplace painted a metallic green. A mirror of the same width hangs above it neatly filling the wall and creating reflective interest. Walls of shelving are still filled with Williams books, papers and periodicals.

Unlike modern homes where the kitchen has become the principal room in the house, Williams’s small galley-style kitchenette is of the kind favoured by metropolitans who dine out most evenings.

Architectural salvage abounds. Williams reportedly loved to recue discarded decorative elements discarded by refurbishers. A corbel has been affixed to the wall like a piece of sculpture, and half way up the stairs a Georgian fanlight still bearing its broken glass panes has been set at an angle parallel to the banister.   The room to the rear has another open fire with a cast iron surround painted a glossy black. The walls here are a diningroom red.

Upstairs there are two bedrooms. The master bedroom has a shower en suite where the showerhead is a repurposed old telephone receiver. There is also an attic room with Velux roof lights.

Agent Alistair Hickey says there has been some builder and architect interest in the property, and he estimates upgrade work will cost around €100,000.

There is a back yard of about 23sq m that is south-facing. Parking is on the street.