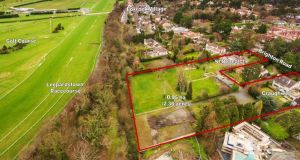 A newly-registered company has lodged a planning application to build 14 houses and 38 apartments at the rear of three properties backing on to Leopardstown racecourse.

Development continues apace in the leafy south Dublin suburb of Foxrock, with a new planning application just lodged for the construction of 52 properties on Brighton Road.

Craughwell and St Benedict’s both came on the market in a receivership sale in 2017 . The properties once belonged to developer David Agar, who paid a reported €22 million in 2005 for the pair and another adjoining house on a combined 3.75-acre site. They were put up for sale, along with a 2.36-acre site seeking €10.25 million in March last year. Both Craughwell and Damson Lodge sold in July for their respective asking prices of € 2.5 million and € 1.75 million each.

The 2.36 acre site was seeking €6 million and its sale price has not been disclosed. It is partially located within the Foxrock architectural conservation area, is just down the road from Brighton Wood, a new development which was constructed by Castlethorn and launched earlier this year; it will have 85 houses and 15 apartments when completed.

The area has seen intensive development in recent months, with developer Francis Rhatigan currently working on the construction of about 28 houses and apartments on nearby Westminster Road, while Homeland Projects have built 10 houses on the same road at Stanford Park.

The latest proposed development on Brighton Road will have nine four-bed houses and five five-beds, either two or three storeys high, with nine one-bed apartments, 23 two-bed and six three-bed apartments housed in one five-storey apartment building, “all with external balconies or terraces”.

The site will have about 89 car-parking spaces, 54 of which will be in the basement, and the entrance to the site is proposed to be via Craughwell, with the existing entrance and laneway to be upgraded and extended to the new development.

A newly-registered company, the Brighton Road Partnership, is behind the application. It is controlled by Richmond Homes, the residential development arm of Avestus Capital, the real-estate investment company founded by four former Quinlan Private executives.

Local residents and other interested parties have until September 27th to make a submission on the plans; and submissions are likely. Last year local residents argued that they were facing an “existential threat” from the uptick in development in the area.