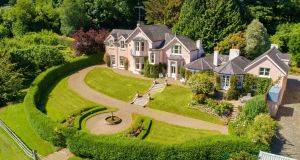 Springmount, Ferndale Road, Rathmichael, Co Dublin is a 433sq m (4,650sq ft) six-bed property that began life as a cottage in the 1820s 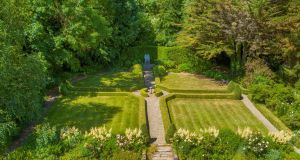 A garden up steps at the side of the house has formal hedging, water features and colourful plants 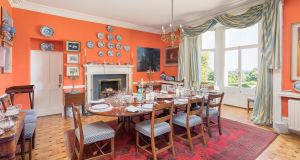 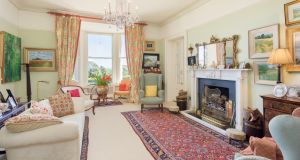 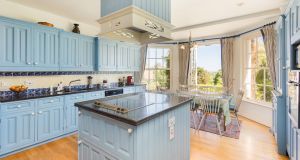 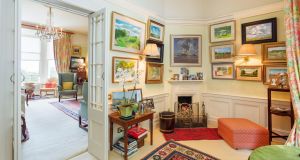 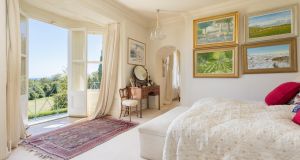 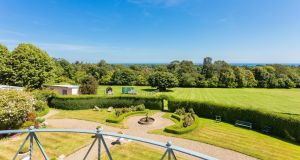 The owners of Springmount, a period house in Rathmichael, Co Dublin, say they wouldn’t sell if they could still manage the gardens. The house, which began life as a cottage in the 1820s, sits on nine acres of lawns, formal gardens, an orchard and meadows with plenty of room for horses. The couple, who bought the house 28 years ago from Smurfit executive Howard Kilroy, are now selling it for €3.85 million through Sherry FitzGerald.

The 433sq m (4,650sq ft) six-bed property comes with a separate 61sq m (660sq ft) two-bed gate-lodge, a converted stables and a tennis court. The owners believe it was the home in the 1950s of Omagh-born songwriter Jimmy Kennedy, writer of Teddy Bear’s Picnic and Red Sails in the Sunset; a window on an upstairs landing features etchings of sailboats.

The property – not a protected structure – is less than 10 minutes’ drive from Shankill village on busy Ferndale Road. In spite of its size and proximity to Dún Laoghaire and Bray, it apparently doesn’t have residential development potential, because it’s located in an area zoned GB “to protect and enhance the open nature of lands between urban areas” in Dún Laoghaire’s current county development plan .

The owners have done a lot of work on the property in the past few decades, but it remains very much a period home with a sprawling layout, vividly-painted walls hung with paintings – many by its architect owner – and handsome features such as light fittings and fireplaces (some not included in the sale). Reception rooms at the back of the house have French doors opening onto formal lawns and distant views of the sea over treetops.

Springmount has two entrances off Ferndale Road; a gravelled drive leads to the deceptively modest front. A tiled porch opens into a narrow timber-floored entrance hall. The drawingroom on its right has tall bay windows and two sets of French doors, one opening into a small “cards room”, the other into a very bright garden room. Built since 1990, this looks much older, with six large sash windows curving around it and more French doors leading into the garden.

A large parquet-floored diningroom on the left of the hall has deep bay windows with French doors opening onto formal lawns sloping down to the meadows. It opens into another hall off which is another good-sized TV room/family room opening onto the lawns and the kitchen/breakfastroom, with blue timber units, black polished granite island unit and a glossy blue Aga set into a tiled splashback. There’s a downstairs ensuite double bedroom at this level too.

A few steps down from the kitchen is a back hall off which there’s a boot room, utility room, toilet and stairs leading up to two bedrooms – a double and a single – and a bathroom. New owners may want to reconfigure this area to make way for an open-plan kitchen/livingroom space.

Stairs in the main hall lead past the landing with the sailboat window to the first floor, where there are three double bedrooms, one currently used as a study. The bright, cream-painted main bedroom has French doors opening onto a Juliet balcony with the best views from the house looking to the sea. It comes with a large dressingroom with fitted glass-fronted wardrobes and an ensuite.

The separate gate lodge has a reception room, two bedrooms, small kitchen and a shower room. It’s a good distance from the main house past the cobbled yard, off which is a converted coach-house. This accommodates a home gym downstairs and upstairs, and a long room fitted with extensive shelving for file boxes. Other outbuildings include a large double garage, more stables and an all-weather arena – but no horses, where once there were four. “All we have now is two dogs and golf clubs,” says the owner.

A garden up steps at the side of the house has formal hedging, water features and colourful plants; a path leads down to an orchard. Tall trees surrounding the gardens include a redwood.