Mayo cottage to be raffled for healthcare workers reaches €500,000 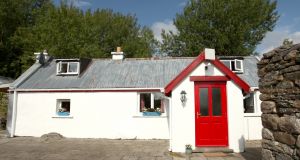 The 150-year-old cottage, on the Mayo side of the Ox Mountains, had been placed on the market through local agent CK Auctioneers earlier this year and attracted offers of up to €90,000 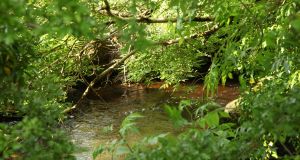 The winner will be getting an idyllic holiday escape tucked away between mountains and the river, 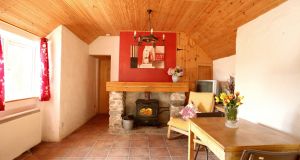 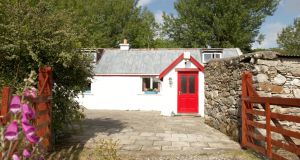 The cottage is near Foxford in Co Mayo. The lucky winner will also receive rights to cut their own turf in the nearby bog

A raffle for a Mayo holiday cottage to raise funds for healthcare workers during the coronavirus crisis has already reached €500,000. The cottage near Foxford, Co Mayo was placed for raffle two weeks ago by a Canada-based Irish couple who are both Covid-19 survivors.

The retired businessman and former doctor with homes around the world wanted to do something to give back after surviving the deadly virus, and decided to put their picture-postcard cottage up for raffle in August. Selling tickets at €10 each, by last Friday they had raised €50,000, but when the draw drew media attention the money started to roll in and has far surpassed their initial target of €250,000.

“We’re a bit shocked,” the owners, who do not want to be identified, told The Irish Times. “It’s very humbling to see so many people putting their hands in their pockets at this difficult time.”

Contributions to the raffle website have come from all quarters – mainly from people with links to Ireland. “Ninety per cent of the names would be Irish, and we’re seeing a lot of Irish Americans who say they have relatives in Mayo and would love a base to visit.”

The couple have stated they will not be making any money out of the raffle and all of the money raised will go towards those who were not medics at the front line of the crisis such as doctors and nurses, but who still took the same risks, such as cleaners, porters and kitchen staff.

They have been inundated with messages from others who were helped by support workers in their hours of need. One support worker wrote: “I entered your amazing raffle . . . but your words meant a million times more to me than winning. I am a cleaner in one of the worst-hit hospitals . . . We put in blood, sweat and many, many tears and we did not get one thanks from management. I didn’t get to see my little son for nearly three weeks.”

The majority of ticket buyers have purchased in small amounts, while a few spenders have stretched to 25 tickets for €250. The 150-year-old cottage, on the Mayo side of the Ox Mountains, had been placed on the market through local agent CK Auctioneers earlier this year and attracted offers of up to €90,000.

The fund is being administered by a Dublin-based accountant who plans to liaise with Siptu to dispense the money across the health sector fairly. Contact has been made with Siptu and the couple are awaiting a response.

The winner will be getting an idyllic holiday escape tucked away between mountains and the river, and upgraded in recent years to include modern comforts such as storage heating and a solid fuel stove. The lucky winner will also receive rights to cut their own turf in the nearby bog.

The retired businessman says he came close to death after contracting coronavirus en route from Mexico to Canada in early March. He recalls vividly a night when he counted 35 coughs with barely a breath in between, and says John Jameson saved his life. “We were too far to make it to a hospital and had been advised to sit it out anyway. The first whiskey calmed me, and after the third I just collapsed on the couch and slept for six hours straight.”

The decision to raise money for healthcare support workers sprang from a combination of their own recent experience of the virus, seeing friends and family around them affected by cancer, and a lifelong belief that support staff in hospitals don’t get the recognition they deserve.

“When you go through life you learn we are all the same under our skins. We all suffer the same pain, and we are really just trying to help in a small way.”

Aberdeen to Athens by bike: Homesick student cycles from Scotland to Greece during pandemic
4

West Cork haven with one of the best views in Ireland for €1.35m
9

Cocktails at home: the best mixes and kits to buy
10