Bloomsday buy: Ulysses pub in Dublin 7 on the market for €700k 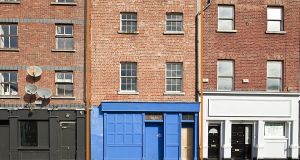 Investors with an eye for an opportunity will be alive to the potential presented by the sale of No 9 Little Britain Street in Dublin 7.

While the address itself might not ring any immediate bells, its previous incarnation as Barney Kiernan’s Public House should be enough to attract the attention of Joycean fans and scholars, given the role the property played in the Cyclops episode of Ulysses, in which Leopold Bloom encounters ‘The Citizen’.

The combination of that famous literary association and No 9’s location at the heart of an area now undergoing wide-scale regeneration and redevelopment is expected to see significant interest in the property, which has been brought to the market just in time for Bloomsday by Citywide Auctioneers at a guide price of €700,000.

Situated in a mid-terrace position on Little Britain Street, the subject property is located just 50 metres from Capel Street and 500 metres from the Technological University Dublin’s new campus at Grangegorman.

It is also situated within a short walk of the Victorian fruit and vegetable market and the Parnell Street cultural quarter. The delivery of ambitious plans for both of these is expected to drive the regeneration of the area, and to increase the number of visitors significantly.

No 9 Little Britain Street comprises a mid-terraced three-storey over-basement mixed-use property, with enclosed rear yard. An 18th-century Georgian property, it extends to 223sq m (2,403sq ft) and consists of a retail space at ground-floor level with toilets to the rear, first and second floors laid out with large rooms to the front and smaller rooms to the rear, and a toilet at mezzanine level between the first and second floors. The basement consists of two storage rooms and a corridor and extends under the pavement to the front.

Quite apart from its role in Joyce’s Ulysses, the property was, during its time as Barney Kiernan’s Public House, also commonly known as The Court of Appeal due to its close proximity to Green Street Courthouse and the Newgate Gaol, and was the setting for the play staged in the Abbey in 1941, entitled Trial at Green Street Courthouse by Roger McHugh.

The property offers a range of potential uses according to the selling agent, either in its current mix of commercial and residential use with refurbishment or with the conversion of the current residential use into multiple residential units.

It was previously granted planning permission (3212/06) for the modification of the retail unit, a one-bedroom apartment at first-floor level and the construction of an additional floor, with a two-bedroom duplex apartment across its second and third floor.

The location of the property falls within the area covered by the Living City Initiative. This scheme allows owners and investors to claim tax relief for money spent on refurbishment and/or conversion of residential property either as income tax relief (for owner-occupied residential) or capital allowance (for rented residential). It also focuses on the regeneration of retail and commercial districts by allowing owners to claim an accelerated capital allowance on money spent on refurbishment and/or conversion of commercial property.

Aberdeen to Athens by bike: Homesick student cycles from Scotland to Greece during pandemic
7

Caroline Crowley obituary: A great listener who ‘even saved lives’
9