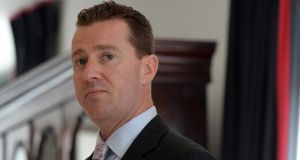 Kingspan chief executive Gene Murtagh has emerged as the buyer of a €7.5 million luxury seafront property on one of Dublin’s finest coastal stretches, Dalkey’s Coliemore Road. The quiet acquisition on this prestigious south County Dublin road makes it the biggest residential property sale in the capital this year.

Mr Murtagh purchased the property from developer Francis Rhatigan who has lived at Lota, on 26 Coliemore Road, since he and his wife, Anne Marie, bought it at auction in 2002 for €4.5 million. The off-market deal took place over the summer shortly after the property on half an acre had been quietly placed on the market.

The sale, which is understood to have been brokered through selling agent Simon Ensor with Sherry FitzGerald, appeared on the Property Price Register in recent days as having closed on August 27th at €7.5 million. Mr Murtagh is believed to have been the first and only viewer of the luxury coastal property. Mr Ensor declined to comment on the sale.

Mr Murtagh came in for a cash windfall in June when he netted more than €3.4 million from the sale of shares in the global insulation manufacturing company. Mr Murtagh sold the Kingspan stock at €40 for a total of €3.454 million, having exercised the options in 2013 at 13 cent each, earning a profit of €3.443 million.

Until now Mr Murtagh has lived close to Kingspan’s Kingscourt headquarters in Co Cavan, but recent sightings of coming and going from the property indicate the new owners have already moved in, and they plan to use Lota as a family home.*

Lota is a 19th-century detached property of about 5,000sq ft standing on a half-acre of manicured grounds with uninterrupted sea views from Dalkey Island across Dublin Bay to Howth. A key selling point is its direct access to the water via its own fully refurbished jetty, bathing area and boathouse. Another recent addition was a 900sq ft detached garage to the front of the property.

*This story was amended on Saturday, September 22nd 2018

These sisters turn three and four on February 29th – or should that be 12 and 16?
Real news has value SUBSCRIBE