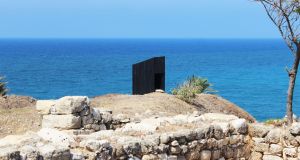 The Sliding Chapel in Byblos, Lebanon, was built in collaboration with an international team from Meeting of Design Students (Meds) 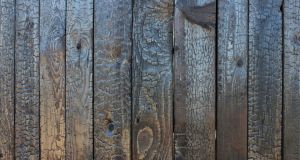 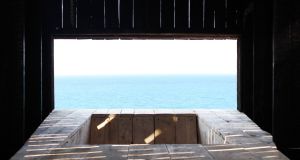 The chapel contains a sunken seat from which to contemplate the sea, and a low door that slows your speed as you enter

Inside a charred-wood chapel atop a cliff in Lebanon, everything slows down. The 5sq m structure, built by architect Kieran Donnellan and students at a design summer school, contains a sunken seat from which to contemplate the sea, and a low door that slows your speed as you enter.

“If you walk into space and have to crouch, it means you’ve been slowed down. And the space feels bigger if you’ve gone in slowly,” says Donnellan, who has designed six pavilions, the first he completed while studying at the Dublin School of Architecture in Bolton Street.

“It was a great opportunity to build real spaces [at an early stage] because an architect, in the course of a normal career, might do site visits but will not always be executing what they’ve designed.

“In college, when learning about theories and materials, and how they work together, it is very far removed from implementation. When you put something together. . . [there is a greater] understanding of space and moving through and occupying.

“So I learned about construction processes, detailing and structures from a practical perspective.”

On the non-denominational chapel in Byblos, Lebanon, part-sponsored by Clare County Council, Donnellan worked with 14 people from the international Meds (Meetings of Design Students) workshop which takes place in a different country each year.

It was Donnellan’s second time running a Meds project on a cliff, the previous being in Istanbul, and the latest project has benefited from its predecessor’s problems and successes.

“Between the pavilions we learned about detailing – if a technique in the first pavilion went well or badly, I thought about it between times and exposed myself to different details . . . bringing a wider range of how to build things,” he says.

For instance, in Istanbul they used laminated beams made from four planks of wood. “The glue and techniques for clamping it together weren’t as good as they should have been. The next time we looked at a metal fixings,” instead of using only wooden joints.

Trying to squeeze as much as possible out of small space is quite a challenge. Making it feel inviting and spacious, and not suffocating

In parts of this year’s Lebanon project, which took two weeks to build, the detailing became exquisitely refined. It was built from timber shipping boxes that were charred using the traditional Japanese technique called shou-sugi-ban. Three planks were tied together to create a chimney which was charred by a fire at the base of it.

“A core group enjoyed the technique and experimented with different timings and quality of charring – which depends on the size of the wood and its characteristics,” says Donnellan. “They developed a strong instinct for the type of charring each method would achieve and it became an art form.”

Although Donnellan designed the chapel, he encouraged input on site. “I would show them the technique and they would start working with it and, if they had ideas how to do it better, we would do it.”

A design concept that came from the first project was that of a datum (a fixed point) – a base-line against which other features are perceived. “It is a consistent element that makes the irregular stand out,” says Donnellan. In Lebanon the floor “is a clean, horizontal surface” that defines where the viewpoint – the sea – is. A band of windows marks this and indicates that you need to sit to see the ocean. The horizontal line also highlights the sloping ground, an angle that the roof follows because Donnellan wanted to give the building an air of slipping into the sea – it is called the Sliding Chapel.

The Istanbul chapel got wide media coverage and that spurred Donnellan to achieve the same with a smaller structure – the first was 6sq m and this is 5sq m. “Trying to squeeze as much as possible out of small space is quite a challenge,” he says. “Making it feel inviting and spacious, and not suffocating.

“Also, if you have a small space and cut a big hole into it, you just let it bleed into the outside world without definition, so managing thresholds is important. We designed the entrance and view to make sure of that,” he says. The building tapers at its low entrance and opens out to the sea view.

Having had early lessons in tangible structures, Donnellan, ironically, became a software engineer after college – designing in a virtual world.

But creating pavilions keeps him in contact with physical structures and, as he’s worked on the details from one project to another, more ideas have been hatched. His next pavilion is set to be in the grounds of an Irish manor, a long way from the heat of Lebanon (“it took time to get used to doing manual labour in 25 degrees”) and its “amazing, dramatic” coast.

But the idea of contemplation in a tiny space will remain. “That idea of slowing down movement was a key driver,” says Donnellan.

Design conference in Galway and Lahinch

On October 26th Meds is coming to Ireland’s west coast for a Menc (Meeting of National Contacts) conference organised by architecture and design students mainly from Dublin and Cork. Split between Galway and Lahinch, it will involve discussions, lectures, talk and trips. In its 10th year, Meds is hoping “this barren Irish landscape will provide us with the perfect backdrop for reflection. We seek to use this Irish wilderness as a tool, a source of inspiration, a place to think.” medsworkshop.com

One mind: The international team behind the Sliding Chapel