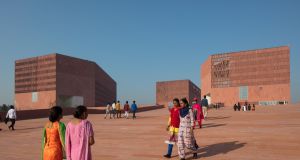 ‘They don’t have to scuttle out of the sun. Instead they can participate in that joy of academic life, walking and talking’

The Dublin practice has also been nominated for the 2021 Mies van der Rohe award for recent work on Kilkenny city’s Butler Gallery, an accolade it previously received for its work on St Mary’s Medieval Mile museum, also in the Marble City.

McCullough Mulvin has a strong track record in the education sector, in particular for its work on buildings within the Trinity College Dublin campus including the James Ussher library, the Long Room hub and its ongoing work at Printing House Square. Education projects currently account for about 40 per cent of its business.

Thapar University’s board asked them to visit initially, says Niall McCullough, one of the firm’s principals. “They got our idea of using architecture to attract students to the university. Buildings and a place are attractors – they’re the first thing they perceive and they form part of their decision-making process.”

The company has been working on the project since 2015 and completed student residences for 2,500 in 2018. Currently the university has 9,000 students enrolled and has scope for up to 15,000. Its central hub, the Learning Laboratory, has a raised outdoor area with concealed shaded walkways underneath that provide students with an escape route from the intense Indian sun. This is what really made the design work, says McCullough, describing it as ‘adventurous architecture’.

“They don’t have to scuttle out of the sun. Instead they can participate in that joy of academic life, walking and talking. That journey is a huge part of the educational experience. Trinity is full of it, where the students can have mind-opening conversations as they walk from one building to another. In India it needs to be a cool space, semi-indoor and semi-outdoor.”

It comprises a library, lecture theatres and a science faculty. Each tall block has a central atrium with a completely different character. Trees in the upper roof gardens shade light down through the atria to the raised ground floor area. All are clad in red Agra stone, an easily available material that has been used for centuries. It is a feature of mosques and Mughal palaces, including Delhi’s historic Red Fort.

The mass of the stone helps with cooling, as does a natural ventilation system and the decision to position all the windows, with white marble detailing, on the north-facing walls. These feature jaali screens, a typical feature of Indian traditional houses.

McCullough says the provision of cooling and shade helps to limit solar gain and nature has been allowed to run through the buildings, from the existing trees retained to the trees on the roofs through which light is filtered.

The geography of the Punjab is dead flat, McCullough says. He describes Patiala, a city in the region’s southeast, as being “like an oasis surrounded by trees with the Himalayas forming a backdrop”. The region has a history of pushing out the boat architecturally. Seventy kilometres to its northeast is Chandigarh, which became the new state capital, post independence, and whose designs by French Swiss architect Le Corbusier signified the then newly independent India, modernised and prosperous.

McCullough’s experience of 21st-century India is “that it is full of an incredible energy and it is changing very quickly”, he says. “While there is still a system where servants exist, there is emancipation and increasingly ambition to get on and get educated.”

In Dublin the firm has just completed work for Poetry Ireland at 11 Parnell Square, while its better-known buildings include the Dental Hospital at Lincoln Place and Temple Bar Gallery and Studios.

The float test: Do you know how to tell if an egg is fresh?

Immerse yourself in swish Bath Avenue three-bed for €975k