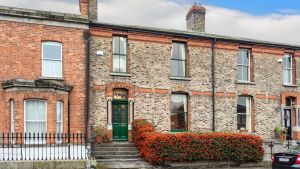 “Rightsizing” is the term increasingly preferred by homeowners who, after many decades in the family home, consider it time to move on to something that better suits their needs now and into the future.

The couple selling 26 Grosvenor Place in Rathmines have lived in their three-storey house for 44 years and are moving on, leaving behind their 218sq m (2,347sq ft) home.

They bought the mellow-brick mid-terrace house dating to 1875 when it, like many other large houses in the southside suburb at the time, was in flats. Number 26 was in three units and the landlord appears to have kept the subdivision simple so that most of the appealing period features were intact, such as the ornate plasterwork, the floorboards, the folding doors between reception rooms, the fine matching white marble chimney piece and the window shutters, all of which continue to add atmosphere.

Other attractive details, including the pair of half pillars at the front entrance and the colourful stained glass in the hall door, make this and its neighbour different from the redbrick Victorians further along the terrace which are more typical of Grosvenor Place.

Off the hall there are two interconnecting reception rooms, while the first of the four bedrooms is to the rear on this level. Upstairs there are two more double bedrooms – one with en suite – and a single bedroom as well as the family bathroom.

An attractive feature of this style of house – also found elsewhere in Rathmines and Rathgar – is that the basement level is below ground to the front, concealed from the street behind a hedge which has grown up along the wrought-iron railings, while to the rear doors open directly out to the garden. On this level there is a large open-plan kitchen/dining area, utility room, shower and a family room to the rear overlooking the west-facing garden. Also on this level is a small room currently used as a home office.

The rear garden – set out in lawn, flowerbeds and patio is about 18m long. Along the back of this terrace is an established mews lane and number 26 has a garage with valuable access to Kenilworth Lane. There is also on-street parking to the front.