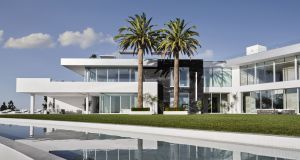 A Dubliner is the designer behind the US’s most expensive home, which has been unveiled with an expected price tag of $340 million (€280 million). Architect and Coolock native Paul McClean has described the eight-year project to complete the Hollywood Hills megamansion as both “intimidating and exciting”.

The 105,000 sq ft, 21-bed Los Angeles superhome, branded “The One” by its developer, featured in Architectural Digest magazine with an asking price reported to be $340 million. The property has yet to launch to the market officially.

McClean, a Dublin Institute of Technology graduate, is a favoured architect of Hollywood’s rich and famous and has designed homes for Calvin Klein, Beyoncé and Jay-Z. He was commissioned to design the Bel-Air property by film producer-turned-superhome developer Nile Niami.

McClean has spent eight years on the project and more than 600 workers were involved in its construction. By comparison, the White House is about half its size.

The home features 42 bathrooms, 21 bedrooms, a 5,500sq ft master suite, a 30-car garage with car-display turntables, a four-lane bowling alley, an entire level devoted to a spa area, a 30-seat movie theatre, five swimming pools and a “philanthropy wing” to host charity galas for up to 200 people.

It is surrounded on three sides by a moat and has a 10,000sq ft deck with views of the Pacific Ocean, the San Gabriel Mountains and downtown Los Angeles.

“This project felt exciting and simultaneously intimidating,” McClean told Architectural Digest magazine. “This project has been such a long and educational journey for us all. It was approached with excitement and was thrilling to create, but I don’t think any of us realised just how much effort and time it would take to complete.

“We wanted to provide that quintessential LA living but on a bigger scale. To allow the home to feel liveable,” he said.

The entrance is filled with water. “Water is something we often use in our design process because it allows for a sensory change that helps you adjust to your surroundings,” the architect told the magazine.

McClean, who decamped to LA shortly after graduation from DIT, set up the McClean Design firm in 2000, but his rise to the top took time. It was helped by a partnership with prominent Irish businessman and developer Paddy McKillen, who asked him to design seven houses in LA, including five for members of the family.

McKillen’s son Drew was the developer of a McClean-designed home that sold in 2015 for $25 million to fashion designer Calvin Klein. He also designed a $120 million home for music power couple Beyoncé and Jay-Z, again developed by Drew McKillen.

However, a prospective buyer may still consider The One a bargain. When interviewed about the property several years ago, developer Niami said he planned to price the compound at $500 million when complete.