On an island, up a mountain, and other far-flung houses around Ireland 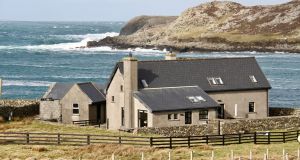 Built in 2004, this Inishbofin four-bed, three-bath property is in walk-in condition.

With Government plans under way to give people the legal right to work from home beyond the end of the pandemic, the practice has taken hold. Tánaiste Leo Varadkar said that Covid-19 has changed mindsets about the nature of work, and remote working practices that might have been achieved in five to 10 years had been realised in under a year.

It’s envisaged that as many as 20 per cent of public servants could be working from home on a permanent basis by the end of the year, and a new code of practice under development by the Workplace Relations Commission will also allow private sector workers to request to work from home under the policy.

The residential property implications are apparent as people can now work from almost anywhere once they have an internet connection. This has already been reflected in a stronger-than-expected year for country home sales, with prices outside Dublin outperforming those in the capital as house buyers vote with their feet.

With this in mind, here are eight homes in remote idyllic locations to consider. High speed broadband may not always come as standard (though local business network hubs are on the increase) and the included Eircode can be used to check the Comreg mobile coverage map for an indication of mobile connectivity in these areas.

There are several properties for sale on the island but this is the only one with a B3 Ber energy rating – useful on those exposed winter nights. It has zoned underfloor heating and uPVC windows. There is one shop on the island, a 12-minute walk away, but Supervalu in Clifden delivers to the pier for pick-up. Lighthouse Networks supplies broadband to the house.

Built in 2004, this four-bed, three-bath property is in walk-in condition and could work well as a rental during the summer months.

The house comes with a separate granny flat that could work as a home office. Lily Finnegan’s pub nearby, at the far side of the townland, is across the road from Biden’s home place. The nearest shop is 4km.

The two-up, two-down traditional farmhouse has dual-aspect rooms, a kitchen with panel doors, tongue-and-groove panelled ceilings and plenty of charm. There are outhouses that could be refurbished for a home studio or office. The two-bed measures about 92sq m and there are a few neighbouring homes on the head. It is about an eight-mile drive to Clonakilty and a four-mile journey to Timoleague and Courtmacsherry. Cork Airport is 30 miles away.

The redbrick-walled bedrooms are on the lower floor, where there is no wifi. The upper floor has a lovely, domed, limestone ceiling and its chartered engineer owner has fed cables for wifi down the chimney, giving it strong connectivity. The property extends to about 139sq m/1,500sq ft. Its roof, accessed via stone steps, boasts 360-degree views of the city and Belvelly Castle and could make a very cool terrace.

Address Errigal House, Meenabol, Dunlewey, Co Donegal
Price €420,000
Agent SherryFitzGerald Rainey
Eircode F92 N23R
Commute Letterkenny: 35 minutes; Belfast city: 152 minutes; Dublin city: 215 minutes
Link iti.ms/3oCti7j
Four-bedroom, three-bathroom, A3-rated home at the foot of Mount Errigal, the highest of the Derryveagh Mountains. The new build overlooks Dunlewey, and is just minutes off the R251, the back road to Gweedore that runs by its base. It overlooks the loughs below, and the island where Diarmuid and Gráinne are said to have bedded down for a night. You can take a boat tour of the waters and ogle the Guinness estate, or visit Dunlewey Centre, a hotbed of local and tourist activity during normal seasons.

The 171sq m/1,840sq ft property has an open-plan kitchen-living area running the depth of the property.

Address The Manse, Coolfinn, Portlaw, Co Waterford
Price €295,000
Agent SherryFitzGerald John Rohan
Eircode X91 HE48
Commute Waterford city: 15 minutes. Dublin city: 125 minutes.
Link iti.ms/2YBTmVl
Across the bridge from the village of Portlaw, in Co Waterford, is Curraghmore House, the setting for the All Together Now festival and the residence of the ninth Marquis of Waterford. Located in the village is the Manse, a charming four-bed built in the 1840s and set on 1.75 acres of beautifully maintained gardens bounded to the north by the river Clodagh.

The house’s period features include timber sash windows, cast-iron fireplaces and ceiling cornices. There was some flooding in 2016 and riverbank works required to prevent a recurrence. The property also comes with a disused church ruin. Built in 1845, if restored, this could make a small income stream, as the property is located about a 10-minute drive from the popular Waterford to Dungarvan greenway. Shop and school is about a four-minute walk.

Address Coole Cottage, Coole West, Athea, Co Limerick
Price €90,000
Agent REA Dooley Group
Eircode V94 F72X
Commute Limerick city: 51 minutes; Galway city: 112 minutes; Dublin city: 173 minutes
Link iti.ms/3tjsdoq
In the wilds of west Limerick, about 6km outside the village of Athea, is the tiny hamlet of Coole West and this picture-pretty one-bed thatched cottage. At just 29.5sq m/317sq ft, it will suit an individual or a very loved-up couple – the bedroom is only 8.5sq m and the kitchen is scullery sized at just over 6.5sq m in size.

Built over a century ago, it is set on just over half an acre with a half-door and a pink sandstone-lined fireplace. There are additional outhouses, one of which is a garage of about 12sq m that could be reworked as an artist studio or home office. There is fibre broadband available in the area and walks aplenty on the doorstep. Listowel is about a 20-minute drive.