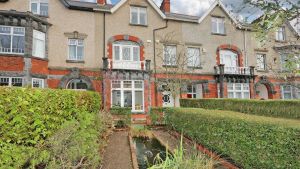 It’s not surprising that the row of handsome three-storey Edwardians on O’Connell Avenue, Limerick with their distinctive balustrade balconies and brick, limestone and pebbledash facades are on the National Inventory of Architectural Heritage. They don’t come on the market often and one of the four in the terrace, Doonea, is now for sale through Sherry FitzGerald seeking €850,000.

It last sold in 2003 when it had been a rental for some years and, says the owner, needed considerable work. Eighteen months later when the renovation was complete and the family were able to move in, what had been a seven-bedroom house became a modernised four bed, while to the rear an extension was added to create a kitchen and living area, the design incorporating a small inner courtyard with access from the back reception room and the kitchen. The work brought the house to a sizeable 263sq m/2,831sq ft.

The bedrooms are over two floors, two doubles at the top of the house both en suite, a single in the return and the main bedroom on the first floor – with a door opening out to the front balcony. It has its own dressing room in what was once a bedroom while what was originally a large bedroom to the rear on this floor is now a bathroom with free-standing claw-foot bath and walk-in shower.

Downstairs there are three reception rooms – fireplaces that were missing in 2003 have been replaced, new windows installed and floors restored – the house’s two original reception rooms interconnect, while the family room is in the rear extension and has a period white marble fireplace and a vaulted ceiling. The new extension also made space for a well-fitted utility room.

This is not a house for a family looking for a large grassy rear garden; it’s a city house and the trade-off for the owners when deciding on the extension was that they preferred roomier living space to outdoor space and anyway, the owner says, it’s just a short walk to the park.

The terrace is set back from the road and Doonea has a garage to the rear though the house’s proximity to Limerick city centre means that for buyers who work in the city, a car may be optional.