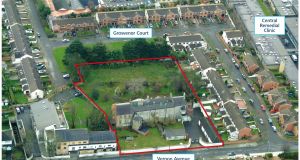 The site of the former Verville Retreat on Vernon Avenue in Clontarf, Dublin

MKN Property Group has acquired its latest residential development site in Clontarf, the former Verville Retreat on Vernon Avenue. The property came to the market in 2016 seeking €3.6 million and MKN is understood to have closed the deal earlier this year.

The site’s recent history serves as a timeline of the Dublin property market’s transition from boom to bust, and back to boom again. Originally owned by the Eastern Regional Health Authority, the site was offered for sale by tender in 2004.

The decision to sell was driven by the expected €2 million-plus of costs deemed necessary to restore the dilapidated building. The then-buyers, a group known as the Verville Partnership, successfully obtained planning permission to redevelop the property as a 45-unit apartment development, with spacious units of up to 202sq m (2,175sq ft) in size.

Following their grant of planning permission, the site was placed on the market in February 2007 seeking €11 million. It was apparently too late, as the market had begun to show signs of decline, which would become a full-on collapse in the following years. Due to that collapse, Crosswaith Developments, a company associated with developer Greg Kavanagh, picked up the site for about €1.1 million in 2014, representing a 90 per cent drop in value.

At the time of that acquisition, large apartment developments with underground carparking were considered financially unviable by developers, and therefore Kavanagh obtained planning to convert the existing building into six apartments, and to build 12 houses, all with surface parking, on the grounds.

Now that MKN has acquired the site, and has significantly higher site costs, it is likely that plans will go full-circle again, as the developer will surely revive the boom-time idea to develop luxury apartment blocks.

Given the success of its Seascape apartments in the same locale, and the immediate sell-out of its Lonsdale housing scheme in nearby Raheny last month, the developer should be reasonably confident of buyer interest when this long-overdue development finally comes to fruition.

Ross O’Carroll-Kelly: We’re not American. This is how people from south Dublin talk?
Real news has value SUBSCRIBE