Wooden it be nice: Unique Rathmines cottage for €650K 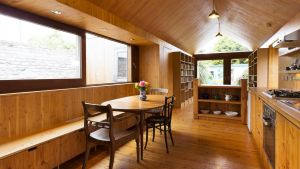 A splash of colour alongside the flowers in the gardens at 4 Richmond Place in Rathmines is the turquoise art studio in the rear garden. This was the atelier of the late Sara Horgan, a visual artist whose works form part of the collections at the Arts Council of Ireland and the Office of Public Works. Horgan was also co- founder of the artists’ collective Black Church Print Studio, now used by 200 artists on an annual basis.

Horgan has passed her artistic skills to the next generation, too; son Conor is an award-winning writer and director – his film The Last Time scooped seven international awards; daughter Kate, a photographer, edits and collates books of photography and has been commissioned by the Irish Museum of Modern Art, while another daughter, Lian Bell, is an arts manager and set designer who spearheaded the Waking the Feminists movement in 2015 that campaigned for equality for women in Irish theatre.

“She bought this cottage when it was a series of ramshackle extensions in 2004, and it was only 50 footsteps from her last home,” says Kate. “Like her other homes, she always wanted to be able to see right through the house.”

Horgan engaged architectural firm Donaghy and Dimond – shortlisted for this year’s EU prize for Contemporary Architecture – to redesign and extend the cottage, the interiors of which are a complete contrast to the quaint cottage exterior, and feature an abundance of storage throughout.

The property has 107sq m of floor space and is almost entirely open-plan. To the front, in the original part of the property, lies a bedroom with a full-length window overlooking the roses in the garden. This opens into a long section that houses a living space, kitchen and dining area to the rear. The living area has the original fireplace and is overlooked from a mezzanine – which could work as an office, further living space or a guest bedroom.

The master bedroom lies in the new section of the house – just beside the double doors which open to the rear garden. The wood finish lends a Swiss chalet effect, but it might benefit from a coat of paint in a neutral tone – which would give a greater sense of light and space.

The garden, with raised beds and old roses, needs maintenance and the floor of a separate courtyard needs some care, but this is a truly unique home in the heart of Dublin 6.

For sale through Sherry FitzGerald with an asking price of €650,000.